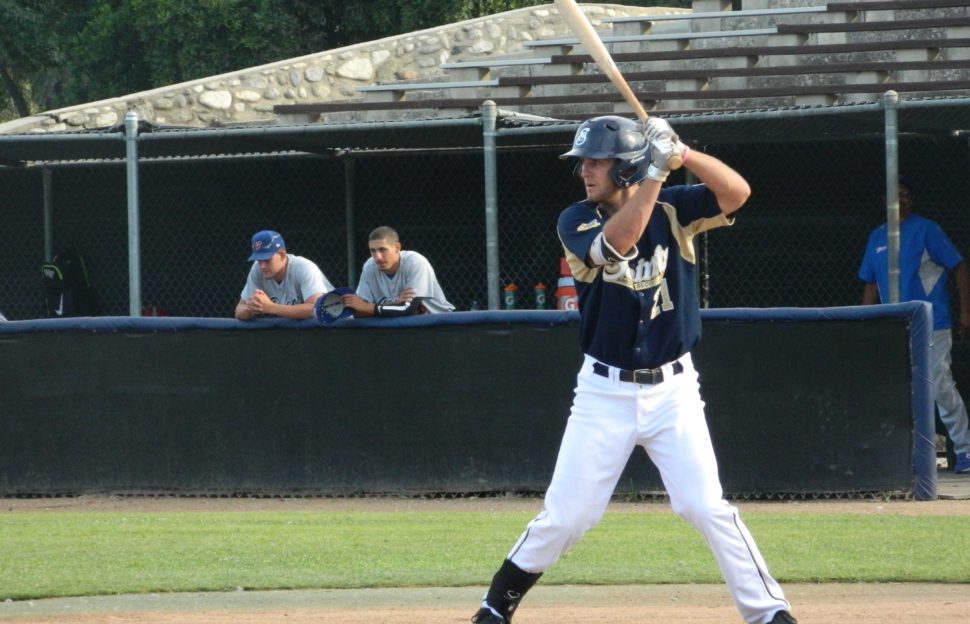 The Saints wasted no time getting off to a quick offensive start. They would score four runs in the first inning. Gabe Chavez (CSU San Bernardino) would hit a blooper past the second baseman into right field to lead off the game. Alex Briggs (LIU Brooklyn) would step into the box next and get hit with a pitch. Tyler Durna (UC San Diego) would walk. The Saints would have the bases loaded with nobody out to start the game.

Blake Burton (University of Washington) would step into the box and would hit a double to right field. Chavez and Briggs would score, Durna would head to third and the Saints would have a 2-0 lead over the Blues early.

“That first at bat. He had about 5 or 6 pitches before that all were balls. I went into it looking for a pitch in a specific location because he would either throw a strike, or it would be a ball way out. Fortunately in that situation I got a strike there,” Blake Burton would comment on his first at bat.

The Saints wouldn’t stop there. Scottie Graham (Loyola Marymount University) would step into the box and would hit a fly ball to left that the left fielder would try to dive for, but it would pop out of his glove. Durna and Burton would score. The Saints would take a 4-0 lead with them out of the first inning.

“Being aggressive, if the pitcher gives you a pitch to hit, hit it,” Scottie Graham would talk about his offensive contributions.

“Having Scottie come up behind me and get a few more runs was awesome,” Burton would say about the first inning.

Jumpei Akanuma (Lee University) would get the start. He would pitch a solid first two innings. The Blues would score two runs though in the third inning on a Tyler Durna throwing error home after a couple of singles by Justin Beck and Tate Samuelson. This would cut the Saints lead in half to 4-2.

“It’s really big having your pitcher get a quick inning and then to get back up to the plate and be aggressive,” Graham would mention about the defensive side of the game.

This lead would hold up until the bottom of the 6th inning. After a two out single by the Blues Myles Emmerson, Akanuma would hit Ricky Martinez with the pitch, putting runners on 1st and 2nd with 2-outs. Justin Beck would come up and hit a deep ball to right field that would score two runs to tie the game 4-4 heading to the 7th inning.

Briggs would lead the 7th inning off with a double off the left field wall. Burton would continue his big offensive day with a single to center that would score Briggs. This would give the Saints the lead back with a score of 5-4. The Saints wouldn’t be able to add on any more insurance runs in the inning.

The Blues would get a couple of base runners on after a throw from Briggs would take Durna off the bag to allow a baserunner in Price Visintainer. He would steal second and then a single by the Blues Tyson Quolas would put runners on the corners. The Saints would hand the ball over to Dellan Raish (Arizona State University) on the mound. Before his very first pitch he would balk that would allow the Blues to score a run. The game was tied once again at 5-5.

Heading to the bottom of the 8th inning we would see another Blues run score. After a walk to Ricky Martinez. Justin Beck would come up to hit a deep double to right center field that would score Martinez. The Blues would have their first lead of the game, 6-5.

This score would hold up to be the final, but not after the Saints tried to come back in the 9th. They would load the bases. Burton would lead things off with a single to right, Corey Harrell (Graceland University) would get hit by the pitch. Runners would be on 1st and 2nd. Magee would get an infield single with 2-outs bringing Greg White (North Carolina A&T) up to the plate. He would hit a ground ball to the shortstop that would end the game on a fielders choice.

The Blues would take this one, 6-5, however, the Saints put up a strong offensive and defensive outing. The Saints will move onto their next game that will be played at Brookside Park in Pasadena, CA on July 6th at 5:05pm against the San Diego Waves.