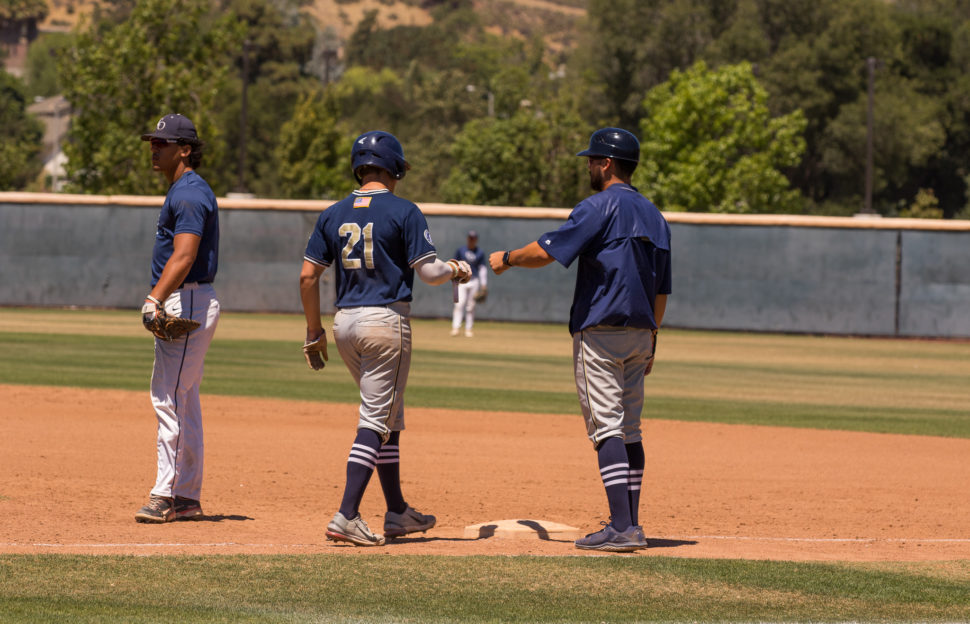 THOUSAND OAKS, CA – It felt like the Arroyo Seco Saints were playing in Thousand Runs, California by the end of their final regular season game, as the Conejo Oaks poured on 14 runs in the Saints' loss.

“It’s a game of failure, but it’s how you’re gonna respond to that failure. If we can forget these last two games, and just learn from them, then nothing to get mad or upset about,” Burden said.

Center fielder Tommy Castillo (Long Beach State) led off the game with an infield single, and a single from Cowley put runners at the corners. McMurray grounded out in the next at bat, but Castillo managed to score to give the Saints an early 1-0 lead.

Starter Dom DiRado (Binghampton) made quick work of the top of the Oaks’ order, striking out the final batter of the inning to maintain the Saints’ lead, but the Oaks pulled away in the second, putting up seven runs in the frame.

The Saints put two runners on to open the third but couldn’t bring any home, and the Oaks added another run to extend their lead to 8-1.

Burden began chipping away at the Oaks’ lead all by himself in the fourth. He led off with a single to center, stole second then third, and reached home on a throwing error to cut the deficit back to six.

“I wasn’t gonna go anywhere until they picked off twice, and then kind of boiled my blood a little bit, and so I took off on him,” Burden said.

The Oaks scored again to make the score 9-2, but catcher Bo Willis (Northwestern State) made a nice throw from behind the dish to putout Raul Sandoval stealing to end the fourth.

Conejo scored four more runs across the fifth and sixth innings, and the Saints’ bats, despite getting guys on base, didn’t have enough juice to get them home.

Conejo did not take their foot off the gas, scoring their 14th run of the game on a solo shot to right center.

The Saints loaded the bases in the top of the eighth with singles from Cowley, right fielder Josh Cowden (Brigham Young) and Burden, but a double play ended the inning before any runs could score.

Reliever Eric Naverette (MidAmerica Nazarene) kept the Oaks off the board in the bottom of the inning, dealing three strikeouts.

Shortstop Brandon Bohning (Cal State Northridge) led off the ninth with a walk, and made it to third off a double from second baseman Jackson Cobb (Crowder). A passed ball allowed Bohning to dash home to make the score 14-3.

That’s where the ninth inning rally began and end. Three outs later, the Saints’ regular season was over, and all focus turned to the playoffs.

The Saints will play their first-round game of the CCL State Championship on Aug. 4 against the Lincoln Potters.

“We’ve had guys fall, we’ve had guys come in with us, but this is the team we want to be together with going into playoffs,” Burden said. “I feel confident we’ll make a good run.”