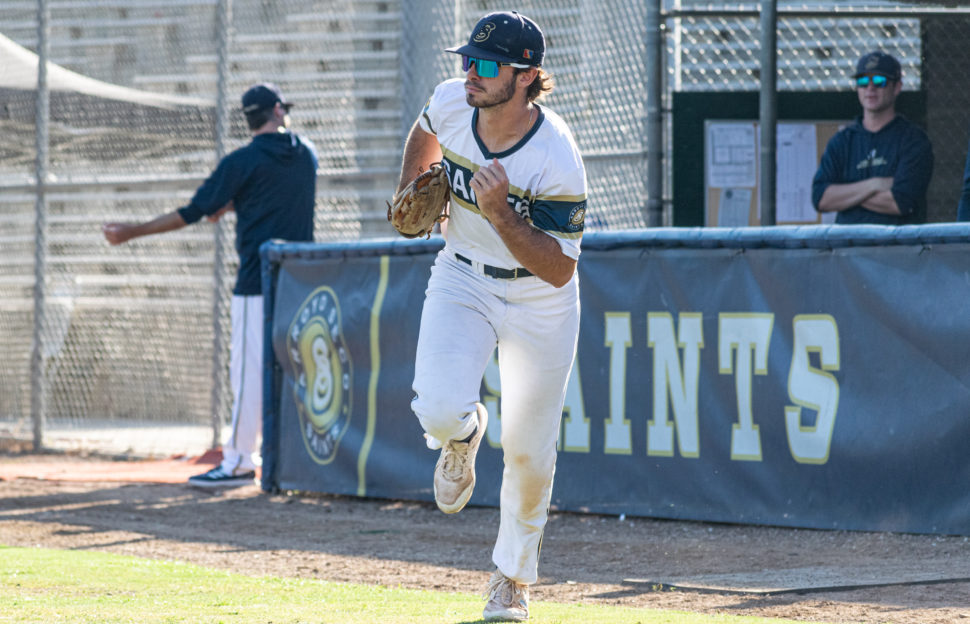 PASADENA, CA – The Saints were back at Jackie Robinson Memorial Field in Pasadena, Calif. on Friday night to face off against the MLB Academy Barons. The Saints tied the game in the seventh inning, but ultimately fell to the Barons 4-3.

The scoring did not begin until the second inning, when the Barons posted two runs to take the lead.

Jeffrey Bauser (Nevada-Reno) got the Saints moving in the bottom half of the inning, sending a one-out triple to deep left field. Jack Walker (Louisiana Tech) then sent a sac fly out to left to earn one back for Arroyo Seco.

Caleb Reyes (Occidental) kept the Barons shut down for five innings in the middle part of the game. Reyes threw 5.0 innings and only allowed two hits and struck out five, allowing the Saints to tie things up in the bottom of the sixth.

Jack Walker then got the line moving in the sixth inning with a leadoff double. Walker then advanced to third on a wild pitch, and scored on the same.

Not long after, the MLB Academy regained the lead, scoring two in the eighth inning.

The Saints were able to claw back one in the bottom half of the inning. Jack Walker started things off again, this time with a leadoff triple. Cooper Harris (Wichita St.) then drove him in to bring the Saints within striking distance.

Matt Marlow (Regis) started out the bottom of the ninth by reaching on an error. Marlow then reached second on a wild pitch and stole third, but the Saints were unable to capitalize as the game ended.

After having a two-hit day, Jack Walker said that he feels more comfortable in the box. “Comfortable I think is the word to use, comfortable in the box, really feeling my swing, staying backside.” Walker preached having patience through his early season struggles, and is happy to have started finding his swing.

Walker was also able to post this big performance with his family looking on from the stands. He said that it is always really special to be able to have big games in front of your family, and he is very appreciative of them coming out to California and supporting him.

Saints’ manager Coach Milam had a lot to say after the Friday night matchup against the Barons. He preached embracing the failure, saying “you have to control the controllables … when you mess up, embracing the failure allows you to make physical adjustments in free space.”

Milam had a lot of praise for Saints’ reliever Caleb Reyes. “He comes from the third division and shoves.” He also had high praises for Matt Marlow and Jack Walker, describing them as “team guys” and saying that “the baseball gods reward guys who do that.”

The Saints will head up to Sinsheimer Park in San Luis Obispo, Calif. on July 16 to face off against the Blues at 4:00 pm PST. Follow along with the game on the Saints’ Facebook, Instagram and Twitter, or tune into the live broadcast on YouTube.