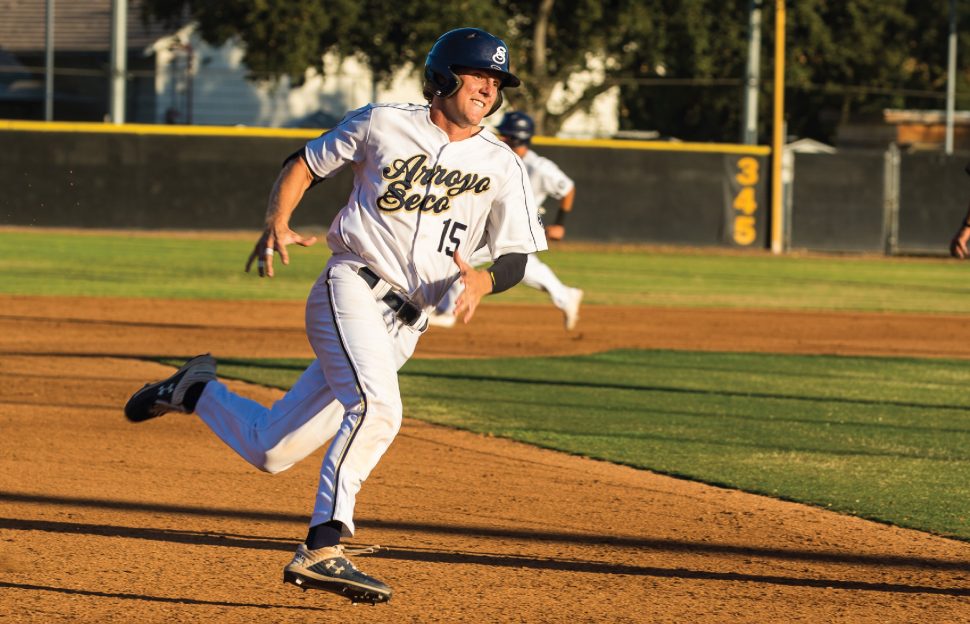 PASADENA, CA — The Arroyo Seco Saints were clawing back from a four-run deficit to the Santa Barbara Foresters, down just 8-6 entering the ninth inning. The Saints have executed comebacks against the Foresters earlier this season, but this time the script was different: a ninth inning grand slam from Josh Stinson put Santa Barbara up 12-6, effectively sealing the Saints’ loss.

Despite the defeat, left fielder Jag Burden (Cal Berkeley) led the offense, going 3-for-5 with an RBI and one run scored. Center fielder Tommy Castillo (Long Beach State) added two RBI on a triple in the second inning, and designated hitter Jake Cruce (San Diego State) drove in a run as well.

“I just stayed on all the stuff they had,” Burden said. “We got the first guy [Santa Barbara starter Gabe Starks] out of there pretty quick.”

Second baseman Jackson Cobb (Crowder) and third baseman Drew Cowley (Cal Poly Pomona) each worked walks to open the first, but the Foresters worked out of the jam to keep it scoreless.

The Foresters quickly got on the board, however, as Tanner O’Tremba sent a nuke to deep left field and make the score 1-0 to open the second.

A Santa Barbara double and a triple with one out added another run, and a grounder to first allowed Kendall Pettis to score a third run. Sears notched his third strikeout of the night to end the inning.

The Saints did not take long to even things up. Burden led off the second with a single, and shortstop Brandon Bohning (Cal State Northridge) was hit by a pitch to put two men on. Cruce managed to bring Burden home with a single right, and Castillo’s triple tied the game at three.

Castillo gave the Saints the lead by taking home after first baseman Jake McMurray (Oral Roberts) stole second after getting on base with a walk.

Sears opened the third with a three-pitch strikeout and kept the Foresters at bay, ending the inning with another strikeout to up his total to five.

Sears pitched another scoreless inning in the fourth to keep the Saints up by one, which included a stellar sliding catch by Burden in left field, but the Foresters came back to take the lead again in the top of the fifth with an RBI double that scored two. A throwing error in the next at bat allowed the Foresters to up their lead to 6-4.

The sixth inning saw another terrific defensive highlight from McMurray, who sprinted and laid out full extension to snag an airborne bunt attempt behind the plate.

“It all just comes down to being ready every single play, and when that opportunity presents itself, make it count,” Burden said.

Despite the spectacular play, the Foresters managed to get on the board again, scoring on a wild pitch to up their lead to three. Santa Barbara continued adding on in the seventh, scoring on another passed ball with the bases loaded.

The Saints began chipping away after the seventh inning stretch, with Cowley reaching first to lead off the inning and right fielder Peyton Lewis (Texas State) singled to right in the next at bat. Burden’s third hit of the night drove in a run this time, cutting the deficit back to three.

Chris Stamos (Cal Berkeley) got the job done in a 1-2-3 eighth inning, notching his third strikeout through two innings. The Saints continued to close in, as a Cowley two-out single to center allowed McMurray to score from second to make the score 8-6.

The aforementioned grand slam quickly shut the door on any comeback attempt, and the Foresters took care of business in the bottom of the frame to secure the win.

The Saints will be traveling up to San Luis Obispo to play the Blues at 6 p.m. PST, aiming to snap their three-game losing skid.

“If we come out and do what we’re supposed to do every single night, sometimes it’ll turn out, sometimes it won’t,” Burden said. “If we just come out and play our game, put a good W on the board, and we can just roll on with the rest of our week.”