Saints Explode for 12 Runs in the Eighth, Dominate Barons 18-7 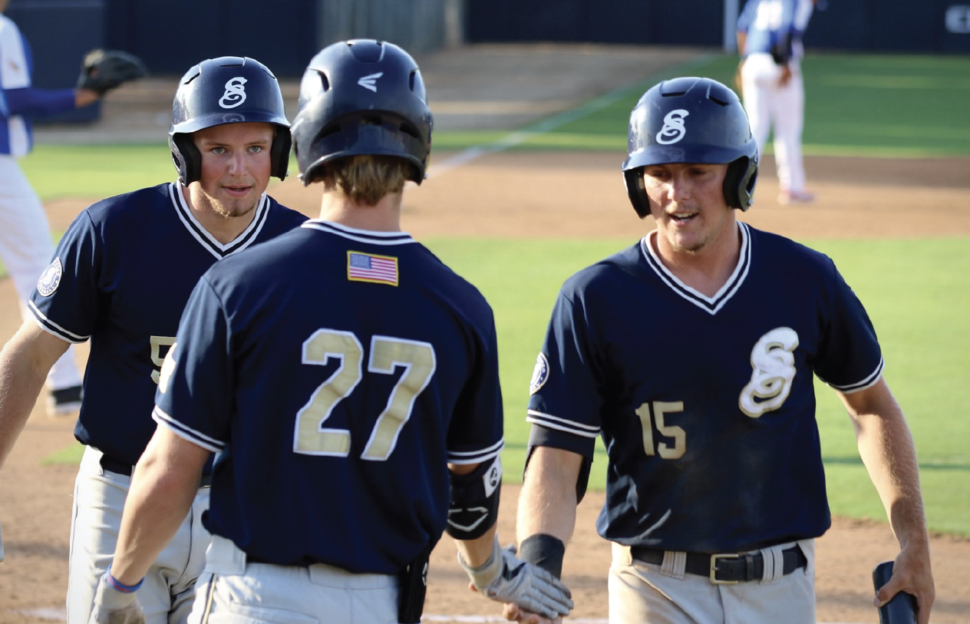 The Saints jumped out to an early 2-0 lead in the top of the second inning. Jag Burden (Cal) was hit by a pitch, followed by a four-pitch walk to Blake Marsh (Undecided).

Connor Bradshaw (Pepperdine) hit a chopper down the third base line, and two throwing errors by the Barons scored both Burden and Marsh.

The Barons answered right back, as they executed three consecutive RBI singles, followed by a three-run home run to put the MLB Academy up 6-2.

Reliever Tommy Hannan (Cal) came in at the bottom of the third, and immediately silenced the Barons' bats. Hannan had five strikeouts in four innings, allowing just two hits and no runs.

Burden scored on a wild pitch in the top of the fourth, cutting the deficit to three runs. The left fielder ended up going 3-4 on the night, with three runs and an RBI.

“A big adjustment for me was trying to stay more relaxed and calm at the plate, and keep everything as simple as possible,” Burden said.

The top of the seventh rolled around, and the Saints’ hitters chipped away. The rally started with a Brandon Bohning (Cal State Northridge) single and a Josh Cowden (BYU) walk.

Jake McMurray (Oral Roberts) hit an RBI infield single, then Peyton Lewis (Texas State) drilled an RBI double into left field to put the Saints within one run. Burden executed a fielder’s choice to tie the game up at six.

A defensive error by the Saints led to an unearned run, as a sacrifice fly by the Barons put them back in the lead 7-6.

Then offensive magic happened in the eighth inning, as the Saints strung together eight consecutive hits. The bats quite literally came alive, as Arroyo Seco produced 12 runs on 12 hits, compiling 23 hits total on the evening.

“When you see the guy in front of you do it, it just gives you the extra push to want to do the same thing,” Burden said. “It also gives you the confidence that the guy just did it and now it’s time to do your turn.”

The offensive momentum was so contagious, even reliever Fino Amador (Cal State Los Angeles) came into the game and roped a base-hit into the left field gap.

The Saints’ bats are hot, and with about three weeks left of the regular season, the race for the CCL South Division is heating up. Burden emphasized just how important it is to stay focused down the stretch.

“Every game, if you come with the mentality to just do your best that day and take it day-by-day, then you’re going to put yourself in a good spot to compete with all these good teams,” Burden said. "And when it’s a tight race like that, every single game counts, because you never know who’s going to beat who.”

Seeking their sixth-straight victory, the Saints are back in action tonight at Jackie Robinson Memorial Field. The first pitch against a non-league opponent, San Diego Waves, is scheduled for 6 p.m. PST. Follow the action on the Saints Youtube and social media channels.

Highlights From Saints 18-7 Win Over the MLB Barons