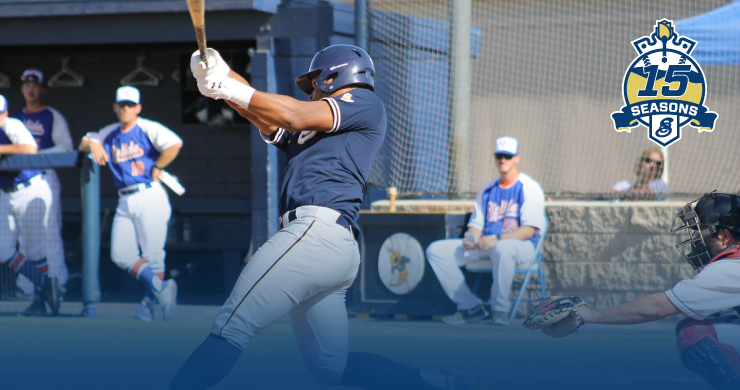 FULLERTON, CA – The Arroyo Seco Saints traveled to their first road game of the year as they played the Orange County Riptide at Fullerton College but could not come away with the victory as they lost 7-3 in the second game of the home-and-home series in the California Collegiate League.

The game started slow for the Saints as the team did not register a hit through the first three innings. However, the Saints reached base from a few walks and one passed ball from a strikeout. The Riptide scored the first run of the game in the bottom of the third inning. Starting pitcher for the Saints was Mark Tindall from Trinity University. Tindall pitched three and two-thirds innings giving up two hits, two earned runs and with two strikeouts.

The Saints received some help on the defensive side in the bottom of the fourth. Catcher Bryce Gray from Notre Dame University picked off Riptide player Aaron Simpson at first base after he took too big of a lead off first base after a pitch in the dirt. Gray threw out another baserunner later in the game when a Riptide player attempted to steal third base. After four innings, the Riptide would lead 3-1 with a single that scored two runs in the bottom of the fourth.

The Saints scored their first run of the game in the top of the fifth inning. First baseman John Thomas and designated hitter Christian Amoya hit back to back singles with one out. The leadoff hitter Colin Shepherd, second baseman, hit a ground ball up the middle to score Thomas from second base.

The top of the fifth ended after two straight strikeouts to leave the bases loaded with the Saints down by one run. In the bottom of the fifth, the Riptide scored three more runs to push the lead to 6-1 after five innings.

Coach Buller: “We talked with the pitchers just to be confident in this time and to not worry about pitches. Summertime is development and they just need to be confident to let it go and see kind of what happens.”

“Offensively, same type of thing, that we just could not execute. Yesterday we were able to get those key hits towards the end of the game and today guys were pressing a little bit as the game went on.”

Colin Shepherd: “I think I got down with two strikes and I was trying to stay middle of the field, back side sort of approach, trying to let the ball get a little deeper and he kind of made a little bit of a mistake so I was just able to stay on it and drive it up the middle. It was a good thing to get us going and get us started a little bit.”

“Anytime you get the top of the lineup type of guys on base and let the guys clean it up and drive us in. It is definitely a big factor getting those first couple guys on base as it opens stuff up early and give our guys some chances to drive some runners in.”

“Keep working on our timing and just getting back into the swing of things and try to get a W tomorrow.”

The Saints will play at home at Brookside Park tomorrow versus San Diego Force in a non-league at 1:05 pm. On Sunday, the Saints will be on the road against the San Luis Obispo Blues at 1:00 pm.