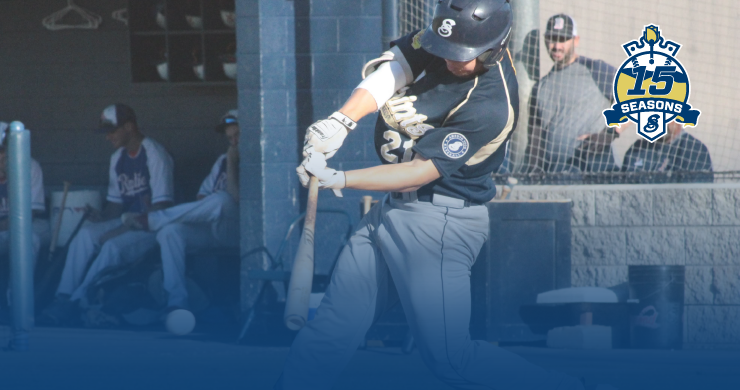 FULLERTON, CA – After dropping three straight games, the Saints were in position to get a much-needed win over the Orange County Riptide Friday night but fell short 5-4 on a walk-off single in the bottom of the ninth inning.

Catcher Bennett McCaskill (Dartmouth) would follow up by hitting another ground ball to Gomez, who once again couldn’t handle it, scoring the Saints second run of the inning. Saints centerfielder Jacob Jenkins (MidAmerica Nazarene) would then slap a single into right field to score Williams. However, Verdejo would be thrown out at home.

Saints starting pitcher Cameron Brown (Notre Dame) was cruising through the first three innings. However, in the bottom of the fourth inning, Brown would surrender a leadoff single to Steve Curry and a walk to Matthew Cooper. The Riptide would get on the board when Austin Sojka drove a single into left field that would get past Verdejo, scoring 2 runs for the Riptide. Josh Nicoloff would then hit into a fielder’s choice that would allow Sojka to score from third and tie the game at 3.

Reed Osborn, from Howard College, would come into pitch and hold things down for the Saints, throwing 3 2/3 innings and striking out five batters.

“I took the Greg Maddux mindset today,” Osborn said. “You can’t really control anything but the pitch you throw to the plate.”

Overall, the Saints pitching staff showed signs of growth on the night; after allowing 28 runs in the last three games.

“I thought Cam[eron] [Brown] set the tone early for us,” Saints head coach Sean Buller said. “Overall, the pitchers were very aggressive, throwing strikes early and getting ahead in the count.”

The Saints would regain the lead in the top of the fifth inning when shortstop Drew Cowley (Cal Poly Pomona) would lead off with a double off the left-field wall. Cowley would eventually score on a wild pitch that gave the Saints a 4-3 lead.

The Saints would hold that lead until the bottom of the ninth inning. Riptide Outfielder Aaron Simpson hit a two-out single into right field that scored two runs and provided the Riptide with a walk-off victory.

For the Saints, they move to 2-6 overall and 2-4 in California Collegiate League play. They’ll travel to Compton tomorrow to take on the MLB Academy Barons—first pitch at 6 pm. “The positive to playing five to six games a week is that there isn’t a lot of down time to get negative. You have to get right back on the field, and I think we’ll have a good chance to get back in the win column,” Buller said.