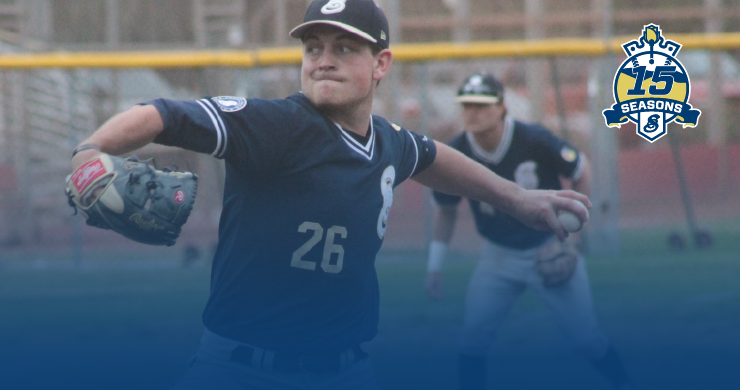 SANTA BARBARA – The Saints travelled to Santa Barbara to play the undefeated Foresters in the first game of a two-game series that is sure to test Arroyo Seco after their recent return to the win column. The Saints lost by a score of 6-3, pushing their record to 4-9, 3-7 in CCL play as the Foresters remain unbeaten at 11-0.

Entering play on Saturday, the Santa Barbara Foresters had yet to lose a game, owning a 10-0 record against CCL competition. The Saints, entering play at 3-6, faced a challenge against a first-place squad that had beaten them twice in Pasadena earlier in the season.

But before first pitch, there were questions as to whether the Saints would even arrive on time or be ready for the start of the game. After a long trip up the freeway from Eagle Rock to Santa Barbara, the Saints arrived at Pershing Park just minutes before their batting practice session.

“We struggled with our bus ride up here,” said Saints head coach Sean Buller. “We got rushed through BP, but the guys didn’t press. I was really happy to see them make the adjustments on the field that needed to be done.”

The Saints matched up Notre Dame southpaw Cameron Brown against Foresters’ starter right-hander Caleb Sloan out of TCU. Both starters were sharp early, retiring batters and keeping offense to a minimum through the first two-and-a-half innings. Going into the bottom of the third inning in a scoreless tie, the Foresters broke the seal, bringing in the game’s first run with an RBI single off the bat of Oklahoma’s Brandon Zaragoza. Santa Barbara tacked on an additional run in the third, and another in fourth, ending Brown’s night after four innings with a total three earned runs allowed and five strikeouts.

“I thought Cam Brown set the tone early,” said Coach Buller, “It was a good battle right up until the end.”

Sloan was dominate early but ran into trouble in the fifth inning. On the first pitch of the fifth, he plunked New Mexico State’s lefty slugger Cooper Williams. On the second pitch, he gave up a double to Notre Dame catcher Bryce Gray. With runners on 2nd and 3rd, lefty batter and Miami Redhawk Colin Shepard came to the plate. Shepard hit a dribbler in front of home, but the ball was thrown away by Sloan, and both Williams and Gray came in to score on the error.

Shepard advanced to third and scored on an two-out RBI single by Drew Cowley.

“Their starting pitcher had really good stuff. The positive was the ability to make the adjustments after the first time around,“ said Coach Buller, “We starting hitting and we knocked him out. He was smooth sailing and our guys made adjustments.”

The Saints tied the game at 3-3, and the score would remain even until an RBI single by Oklahoma State’s Ryan Cash gave the Foresters the lead in the 7th inning.

But as the Saints have shown all season long, their play is defined by their resiliency and never say die attitude. Arroyo Seco would put two runners on in the eighth but ultimately stranded them. Unfortunately for the Saints, the Foresters were able to tack on in the later innings. Santa Barbara scored a pair of insurance runs in the eighth to put the game of reach, and in the ninth against closer Chase Wallace, the Saints went down quietly.

“I liked how we were competitive today,” said reliever Michael Gomez, who struck out six but earned the loss, “and I think we did a really good job with ‘the fire.’ I think we need to bring that tomorrow and clean up some of the mistakes.”

The Saints play the Foresters in Game 2 of their weekend series at 2 PM at Pershing Park in Santa Barbara on Sunday. They then have a day off and return to play on Tuesday against the Academy Barons in Compton at 12 PM, before returning home to play Ventura County again next Wednesday evening.