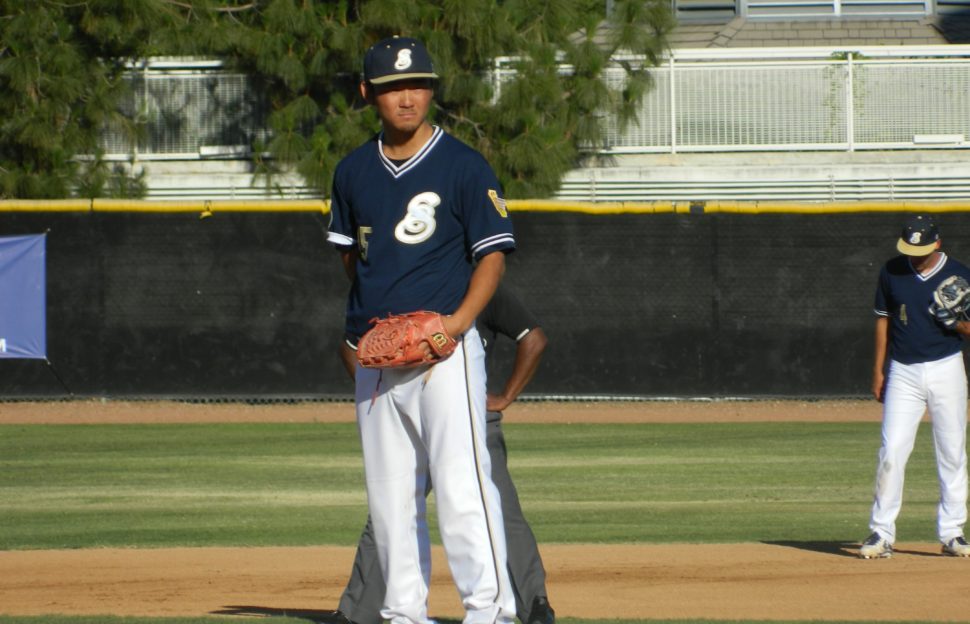 The Arroyo Seco Saints had one of their best performances of the season on Wednesday night, defeating the MLB Academy Barons 14-1 at Jackie Robinson Memorial Field. The Saints are 4-2 against the Barons this season, and the win comes at a crucial time for Arroyo Seco, where they look to stay alive in the CCL Playoff race.

The Saints were aggressive at bat and stayed that way for the entirety of the game. In the first, Tyler Durna (UC San Diego) hit a triple to bring home Gabe Chavez (CSU San Bernardino) for the Saints first run. A two-run homer by outfielder Brennan McKenzie (Cal Poly Pomona) and a single by shortstop Alex Briggs (LIU Brooklyn) would give the Saints a 4-0 lead.

In the second, the Barons would score their first and only run of the day. The Saints on the other hand, answered back with three more runs – due to a wild pitch that would bring home Joshua Magee (Faulkner University), a Blake Burton (University of Washington) RBI-single, and a run-down that would allow McKenzie to steal home from third, giving the Saints a 7-1 lead.
“Everyone is just seeing the ball very well and are able to do their job and make plays,” McKenzie said.

McKenzie would go 2-4 at bat, scoring three runs, including a solo-HR and two RBI’s.

In the fourth, the Saints would score five runs off of five singles which came from McKenzie, Burton, Briggs, Magee, and Scottie Graham (Loyola Marymount), giving the Saints a 12-1 lead.
Briggs, who went 3-4 at bat with one run and two RBI’s, explained that the entire team was able to come out aggressively and take advantage of the opposing fastball.
“Offensively, we just jumped on pitches and on defense we just tried to help our pitcher the best we could,” Briggs said. “I was just going up there looking for the fastball and adjust for the off-speed, and for the most part I got my fastball. I was just trying to react, and it worked out today.”

Phenomenal pitching from the Saints bullpen kept the Barons out of rhythm for the entire game. Starter Jumpei Akanuma (Lee University) recorded three strikeouts in six innings for the Saints, while the rest of the Arroyo Seco defense would keep the Barons from getting on base with many quick outs.

In the seventh inning, the Saints would score another two runs thanks to Corey Harrell (Graceland University) hitting a two-run homer to center field, which gave Arroyo Seco a 14-1 lead.
“We hit a lot of fastballs, looked for them early in the count, and jumped off from the start,” Harrell said. This moment was special for Harrell, as this would be his last game for the Saints this season, having to go home due to personal reasons. Harrell was second on the team in homeruns this summer with four.

“It was great to score that final homerun. I love the atmosphere and love these guys,” Harrell said. “It was a high note for me and probably one of the only times I’ve ended my season with a homerun. This was definitely something special.”

Neither team would score after the seventh as the Saints finalized their dominant victory. The win gives Arroyo Seco their fourth consecutive victory and even more momentum going into the rest of the week.

The team plans to carry over their aggressive mentality tomorrow as the Saints will head to La Mirada to take on the SoCal Catch. The Saints look to win two games tomorrow, as they will conclude an unfinished game that was called in the ninth inning on June 14, where the Saints were leading 13-5. The unfinished game will start at 3:30 p.m. and the second game will begin at 4:30 p.m. at Biola University.