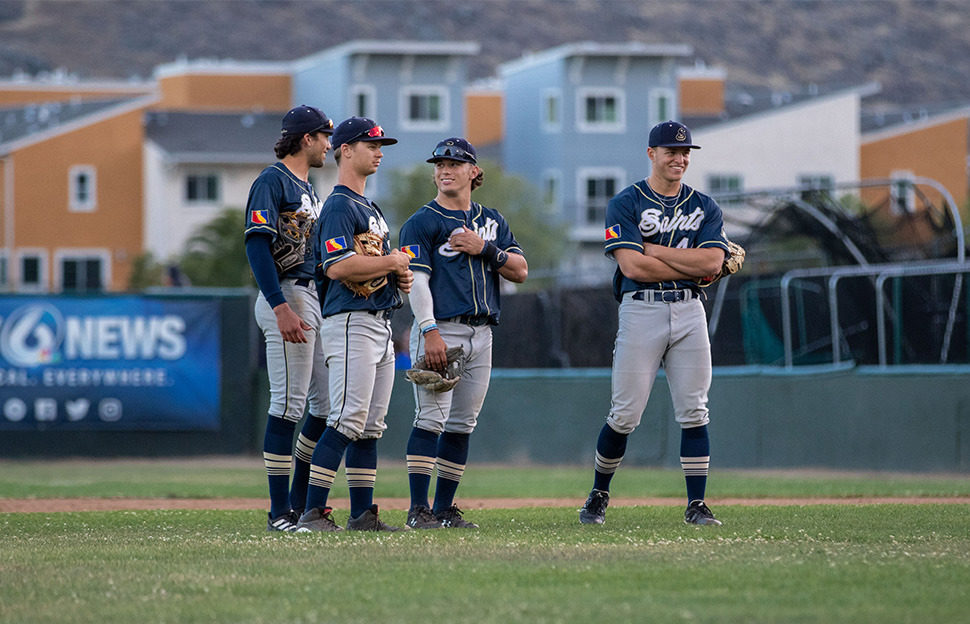 SAN LUIS OBISPO, CA — The Saints’ Sunday evening matchup at a packed Sinsheimer Park in San Luis Obispo, Calif. was one to forget, as the Blues’ offense appeared unstoppable in a 9-1 win.

The home team was in the driver’s seat almost immediately, going up 4-0 in the second inning. Arroyo Seco responded in the fourth when Max Blessinger (Pasadena CC) slammed a triple all the way to the center-field wall, giving his squad some life.

During the at-bat, Blessinger found himself in an 0-2 hole. However, he was able to lure Blues left-hander Bryson Van Sickle (Utah) into giving him the pitch he wanted.

“I made an adjustment to get up into the box a little bit and try to kind of bait him into throwing a fastball,” explained Blessinger. “I ended up getting the fastball, kind of up in the zone, and that’s where I want to do damage.”

The Saints outfielder then capitalized on a wild pitch to cross home plate and make the score 4-1 Blues. But San Luis Obispo would stay hot, rattling off three more runs in the fourth inning to take a commanding 7-1 lead.

Despite being down big throughout most of the contest, Arroyo Seco gave it their all until the final out. And Blessinger said he and his teammates always believe they can claw back into a game, even if the chances are slim.

“When you’ve seen it from both sides… you know how quickly the game can change. It’s very tough to do, to come back when you get down big… but it can be done, so I think knowing that, you kind of just go and see what happens,” said Blessinger.

The Saints’ efforts paid off in the sixth inning, as Peyton Holt (Arkansas) and Nathan Becker (Rice) combined for a flashy 4-3 double play.

After Chase Gallegos (UNLV) was walked, Luke Mistone (CSU Fullerton) knocked a ground ball right to second base. Holt made the grab while sliding into the bag and, from his knees, hurled the ball to Becker in time to cap off an impressive sequence.

But a comeback wasn’t in the cards on Sunday, as the Blues kept the Saints at bay and cruised to an eight-run victory.

While the loss was undoubtedly tough to swallow for the Saints, Blessinger emphasized the importance of the team having a short memory.

“Once the game’s over, things happen too quickly, you just got to flush it and move onto the next one,” Blessinger said. “We’re turning around, bussing home, and we’ll be back on the field in less than 24 hours.”

Arroyo Seco will return to Jackie Robinson Memorial Field on Monday for the team’s highly-anticipated inaugural Fourth of July game against the Orange County Riptide. First pitch is slated for 5:05 p.m. PST. You can catch the action on the Saints’ YouTube and other social media channels.