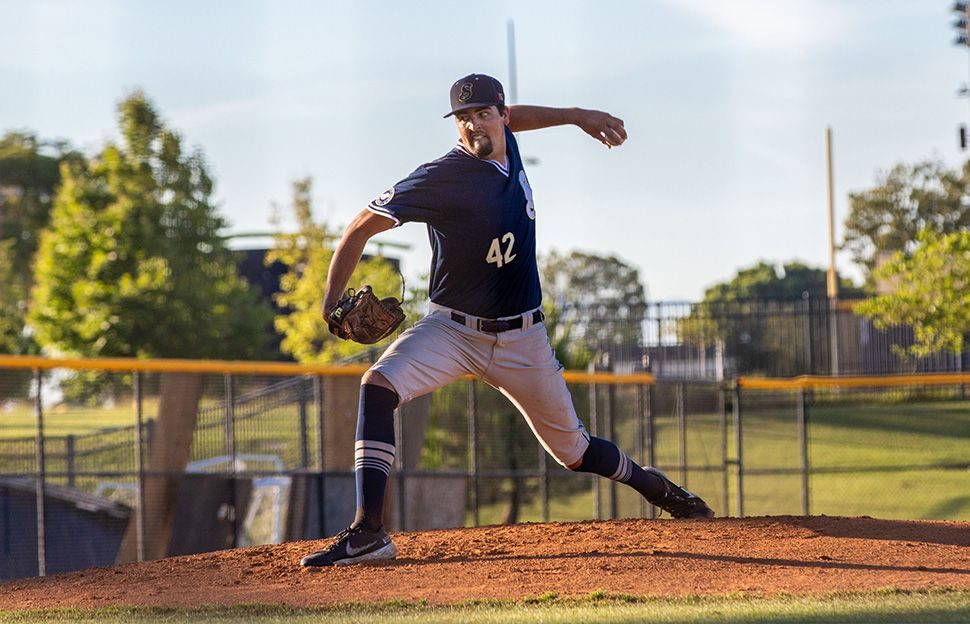 IRVINE, CA – The Saints traveled to the Great Park Sports Complex in Irvine, Calif. to face off against the Orange County Riptide for a Friday night matchup on July 8th. The game started as a pitching duel, but the game broke wide open in the sixth inning and turned into a heavily contested extra innings shoot-out.

Jacob Widener (Oral Roberts) got his first start for the Saints this summer and was nothing short of spectacular. Widener kept the Riptide scoreless through five innings. He only gave up two hits and struck out ten during that stretch.

The scoring finally started in the sixth inning. Drew Cowley (Oregon) and Kyson Donahue (Hawaii) started the inning with a pair of walks. Both runners advanced on a wild pitch, and Matt Wong (Hawaii) sent a sacrifice fly to score the first run of the game. Matt Marlow (Regis) then took a two-out walk to keep the inning going. Dylan Johnson (Gonzaga) sent a double into the outfield, which lead to Jordan Rogers (Wichita St.) driving two more runs in. The Saints held a 4-0 lead at the end of the sixth.

The Riptide struck back in the seventh inning and scored four runs of their own. The game remained quiet until the final frame of regulation.

Jordan Rogers took a lead-off walk to begin the ninth inning, He then stole second and scored on a Jeffrey Bauser (Nevada-Reno) double to take the lead for the Saints. With one man on, Drew Cowley was issued an intentional walk. Enter Peyton Holt (Arkansas), who has come into the game as a pinch hitter. Holt sent a single out to score Jeffrey Bauser and extend the lead to two going into the bottom half of the ninth.

The Riptide decided the game was not over yet and put up two runs of their own in the bottom of the ninth to send the game to extra innings.

Matt Marlow started the tenth on second base due to extra innings rules, and Drew Cowley was given his second intentional walk of the night. Jordan Rogers stepped up to the plate and sent a missile to the outfield fence to bring in two runs on a bases-clearing triple.

With the Saints in the lead going into the bottom of the tenth, manager Aaron Milam called to the bullpen for Jake Porter (BYU) to close out the game. With a man already on second, Porter had a three up, three down inning to end the game.

Jacob Widener said that his process between coming from the bullpen and starting was not much different. “Just went out there and try to get everything done for the team … just had to make sure my mind was ready to go and get after it.” Widener also has high praise for catcher Cooper Harris (Wichita St.) behind the plate, saying he “couldn’t have somebody better to throw to”. Widener and Harris were a dynamic duo early on, with Widener striking out ten and retiring the last nine batters he faced consecutively.

Jordan Rogers had the go-ahead RBI and said it was essential to focus on trusting himself at the plate. “I’ve been doing this for basically my whole life, just being able to trust myself, not overcomplicate things usually gets the job done.” After the big game, Rogers also said that he plans to focus on staying out front and hunting fastballs.

Saints’ manager Aaron Milam had high praise for the team after the Friday night game. Milam has said that the team is playing for each other as the season has gone on, “you can tell by the way the kids interact in the dugout and interact with each other.” The team certainly looks like a cohesive unit, picking up their third win in three games.

The Saints will head to Compton, Calif. on Saturday night to face off against the MLB Academy Barons at 6:00 pm PST.