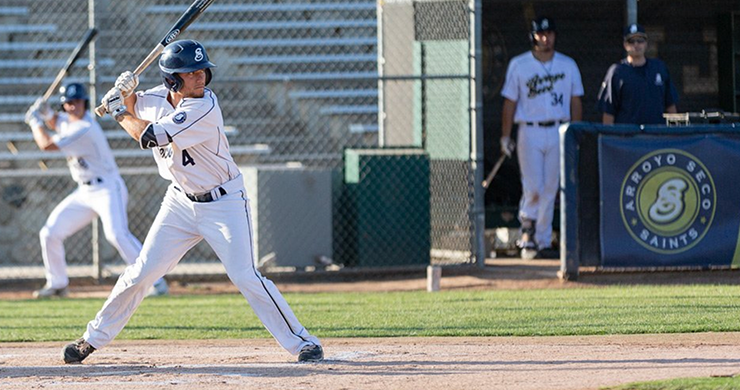 PASADENA, CA – The game would ultimately be decided by two explosive hits in the bottom of the eighth inning, however, the Saints set the tone right from the very beginning in Thursday’s 10-6 victory over the Academy Barons.

Colin King (Regis) pitched five quality innings allowing one unearned run on three hits and one walk with four strikeouts. The Saints were able to jump out to an early lead after Nolan Tressler (Georgia Southern) scored on a fielder’s choice. Then, Marco Martinez (PCC) drove in Evan Russell (Tennessee) with an RBI single to put the Saints up two after one frame.

“I feel good.  Me and the catcher, [Matt] Thomas (Harvard), we talked about a game plan before the game,” said King. “I feel like we executed it well and were on the same page all five innings, so I feel good about it.”

The Saints would extend their lead to five runs in the bottom of the third after David Reyna (Arkansas Monticello), Russell and Nikolas Pagan (Hartford) crossed home plate. The Barons finally got on the board in the top of the fourth, however Reyna answered back with an RBI single to score Christian Scott (Tennessee).

The Saints were led offensively by Martinez (3-4, 3 RBI, 1 R), Reyna (2-4, 1 RBI, 2 R), and Andy Garriola (Old Dominion), who came up clutch with a pinch-hit two-run home-run in the bottom of the eighth. Russell also had a big night by stealing two bases and scoring three runs.

A three-run home run for the Barons in the top of the sixth would cut the Saints lead to two. The following inning, Zachary Griggs (UTSA) bailed the Saints out of a jam with the bases loaded by limiting the Barons to just one run.

In dramatic fashion, the Barons tied up the game in the top of the eighth, however the Saints were unwilling to allow such a comeback to come to fruition. Martinez put the Saints back in front with a two-RBI double, which was followed by a towering home run over the left field wall by Garriola, giving the Saints the 10-6 lead.

“We started off hot, kind of cooled down a little in the middle of the game, and then towards the end of the game, we got hot again,” said Reyna.

Alex Cornwell (USC) sealed the deal for the Saints after throwing 1-2/3 innings in relief, allowing just one hit while striking out four batters.

The Saints will travel up north to take on the San Luis Obispo Blues on Friday at 6 p.m.