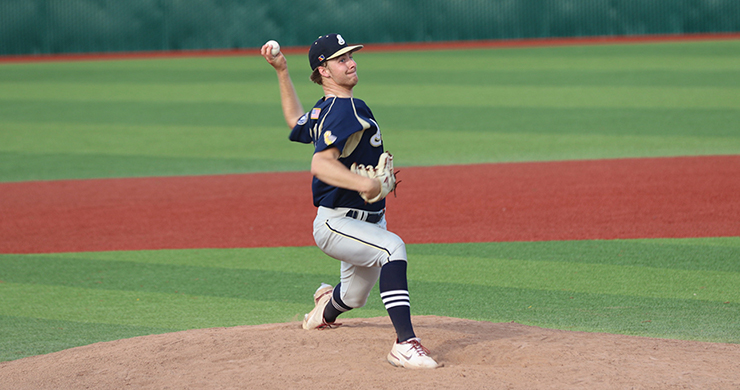 VALLEY GLEN, CA – After an offensive outburst at home the night before, the Arroyo Seco Saints gutted their way out of a pitcher’s duel against the Ventura County Pirates to improve their overall record to 3-0. Despite the 6-1 score line, the Saints were protecting a two-run lead for the majority of the game.

Starting pitcher Merek Sears (Washington State) picked up the win, striking out six and walking just one in five innings of work.

The Pirates got on the board in the bottom of the first inning. Center fielder Ian McIntyre stole third, and an errant throw allowed him to run home and take a 1-0 lead. Sears struck out two batters in a row to limit the damage to one run.

“I was a little bit thrown off at first with the mound and everything, but I felt good,” Sears said, “I was able to get through all five innings and put up some zeros to get my team a good shot to win.”

And put up zeros he did.

Sears continued to settle in at the bottom of the second, striking out two more batters and keeping the Pirates at bay.

The Pirates nearly doubled their lead in the bottom of the third after Jason Ajamian blasted the ball to right field, sending McIntyre home from second, but Saints right fielder Peyton Lewis (Texas State) shot a rope to catcher Tanner Lindsly (Oral Roberts) at the plate, giving him plenty of time to make the tag and keep the score 1-0.

“Our defense was able to control any type of momentum that the other team was trying to put together,” manager Aaron Milam said.

Third baseman Drew Cowley (Cal Poly Pomona) led off the top of the fourth with an infield single, and a throwing error by Ventura Country starter Cole Dale prompted Cowley to chug to third in the following at bat, where center fielder Jag Burden (UC Berkeley) blooped a single to left center and tie the game 1-1.

The Saints weren’t done yet, loading the bases for Lindsly, who worked a full count into a walk to send Burden home and take the lead. First baseman Blake Marsh extended it with a fielder’s choice single to drive Lewis home and make the score 3-1.

A scoreless fifth inning made way for a quiet top of the sixth for the Saints bats, and right-handed pitcher John Chomko (Texas-San Antonio) came on to relieve Sears, pitching a 1-2-3 frame.

The pitching duel continued, as the Saints had no answer for Pirates reliever Eric Crouse, but Chomko continued to deal. He struck out two batters in six pitches before taking down the third on his seventh pitch to keep the score 3-1 entering the eighth.

The Saints stranded two base runners in the eighth, but the defensive highlights kept coming. Ventura County’s Ajamian launched the ball to the left field wall, but a quick scoop and throw from Josh Cowden (Brigham Young) in reached second baseman Jackson Cobb’s (Texas Tech) glove in time for the tag.

The Saints added three insurance runs in the top of the ninth via RBI slappers from Cowley and center fielder Cooper Elliot (Wichita State) to stretch the lead to 6-1, and closer Dom DiRado (Binghamton) struck out the side to secure the win.

The Saints will host the Walnut Creek Crawdads tomorrow night at 6:05 pm at Brookside Park.