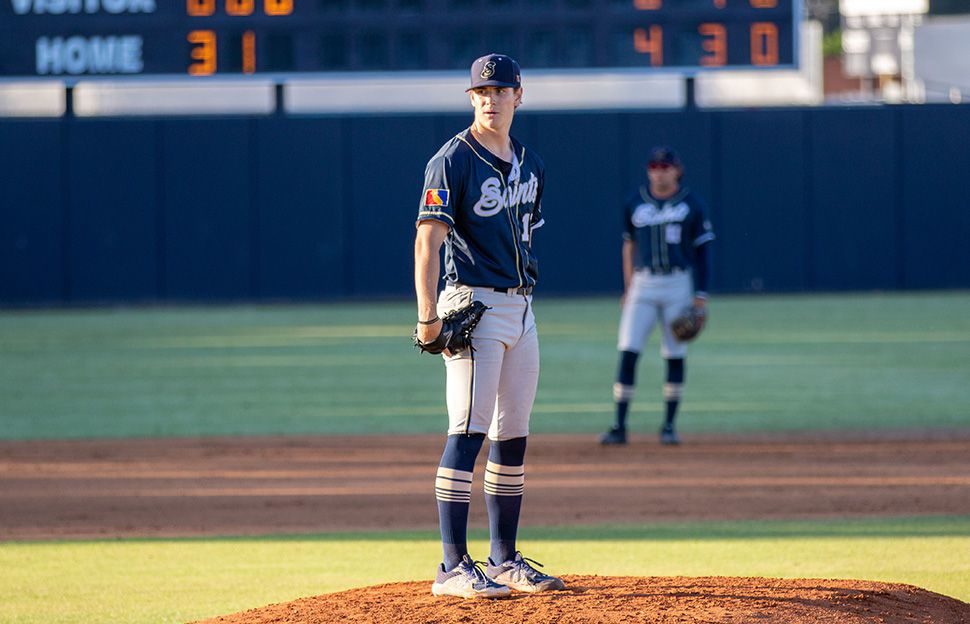 COMPTON, CA — The MLB Academy Barons jumped out to an early lead and never looked back, holding on to defeat the Saints 4-2 on Tuesday night in Compton, Calif.

The Barons put up three runs in the first and appeared poised to take control of the game. Sensational pitching from Saints reliever Christopher Stamos (California) stymied any momentum the MLB Academy had built up.

In five dominant innings, Stamos struck out eight batters while only surrendering two hits and one earned run. The left-hander attributed his success on the hill to getting ahead of the batters he faced.

“Getting ahead of guys. I think there was one 2-0 count,” Stamos said. “And I think when you’re able to get ahead of guys early and often, especially with all your pitches, it’s going to go well.”

Arroyo Seco’s offense broke the shutout in the top of the fourth inning, when Max Blessinger (Pasadena CC) lined a single into center field, driving in Peyton Holt (Arkansas). The Saints would strike again in the sixth, as Kyson Donahue (Hawaii) crushed a solo home run into center field, making the score 4-2 Barons.

Carlos’ solid performance on the mound is only the latest example of improvement from the Saints’ bullpen this season. Stamos believes that the relievers’ success over the past couple of games is a positive sign of things to come.

“…We’re definitely improving. I feel like a lot of guys were still getting their feet set at the start of the summer… But I think if we’re able to get zeros on the board at a regular pace…it’s going to be a lot of fun baseball,” Stamos said.

Despite steady pitching and offensive momentum, the Barons were able to hold Arroyo Seco off of the scoresheet for the remainder of the game, closing out the evening with a 4-2 victory.

Saints Associate Head Coach David Feasler had a lot of praise for his team regardless of the loss, echoing Stamos’ sentiment about the bullpen.

Feasler also discussed the importance of his team controlling their emotions in-game, as doing so will help them generate quality at-bats.

“Just stringing together quality at-bats,” explained Feasler. “Winning pitches in the at-bats, not letting our emotions get the best of us on bad strike calls or if something bad happens in the game…But overall…we’ve been very, very good offensively…”

And Feasler has no concern about this loss in the big picture, saying that both him and his team know they are extremely talented, and that everything will soon come together.

The Saints will head back home to Jackie Robinson Memorial Field for a Wednesday night contest against the Santa Barbara Foresters at 6:05 p.m. PST. The two ball clubs have played each other twice so far this summer, splitting the season series at one win apiece. Follow the action live on the Saints’ YouTube and other social media channels.