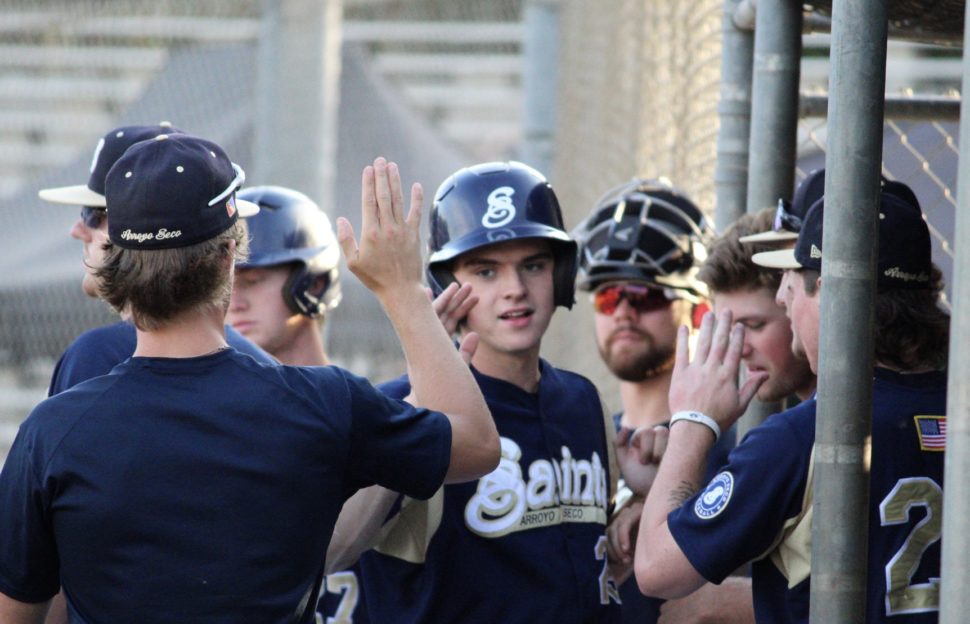 PASADENA, CA - It may still be June, but the Arroyo Seco Saints needed to win Tuesday's game against the Conejo Oaks. Coming off of a 2-4 week, with two losses coming against these Oaks, there was a sense of urgency among the team. The Saints got the bats going early and often, overwhelming their division rival, 12-3.

The Saints offense got cooking right out of the gate, putting three runs on the board in the first inning. Center fielder Connor Bradshaw (Pepperdine), playing in his first game since last Thursday, set the tone as he launched a lead-off home run to left-center field, his second one of the young season.

"I think I have my approach locked down, so even if I take a couple weeks off, I could go back in and be ready no matter what," Bradshaw said. "I feel like an approach is more important than hitting everyday and getting your swing right, locking down that approach is the most important thing."

Bradshaw clearly didn't have any rust from the time off. With the bases loaded later in the inning, Peyton Lewis (Texas State) hit a sacrifice fly to left field that knocked in Cooper Elliot (Wichita State), and Drew Cowley (Cal Poly Pomona) raced home from second to put the Saints up 3-0.

After the Oaks scored one in the top of the second, Bradshaw came up big for the Saints again in the bottom half of the inning. He lined a fastball over the head of Oaks left fielder Zach Gregory (Arkansas) for an RBI triple, allowing Tanner Lindsly (Oral Roberts) to score. Bradshaw would later scamper home to score on a passed ball, extending the lead to 5-1.

"You know, it's good to see them square the ball up again," said hitting coach Connor Spencer. "Baseball is a game of adjustments. We’ve taken the past few days to come out to the yard early, we’ve started using the machine... some adjustments with their approaches, so I’m glad to see it start to pay off. It's a long season, so they gotta keep grinding."

Starting pitcher Creighton Hansen (Wichita State) had the Oaks number in this one, pitching four strong innings and only giving up one run. He ran into trouble in the fourth inning after walking the bases loaded with only one out, but that's when Hansen stepped it up. He forced a pop-up from Oaks shortstop JT Navyac (Cal State Fullerton), and got a dribbler right back to him to end the Oaks threat.

Arroyo Seco kept adding more runs throughout the game. In the third frame, Lindsly smacked a two-run single to right, his second and third RBI of the year. Fellow Golden Eagle Jake McMurray (Oral Roberts) collected his third hit of the night in the seventh, an RBI double that scored Josh Cowden (BYU). Cowley stayed hot, hitting an RBI double in the eighth that put the game out of reach for good.

The Saints will need the bats to stay hot as they'll match up against the Santa Barbara Foresters. That game will be at Jackie Robinson Memorial Stadium, with first pitch at 6:05 pm PST.
--
Contributors
Saints Reporter Lucas Banks
Saints Photographers Joe Pohoryles, Bailey Cowling, Angie Martinez

Highlights of Saints 12-3 Win Against the Conejo Oaks