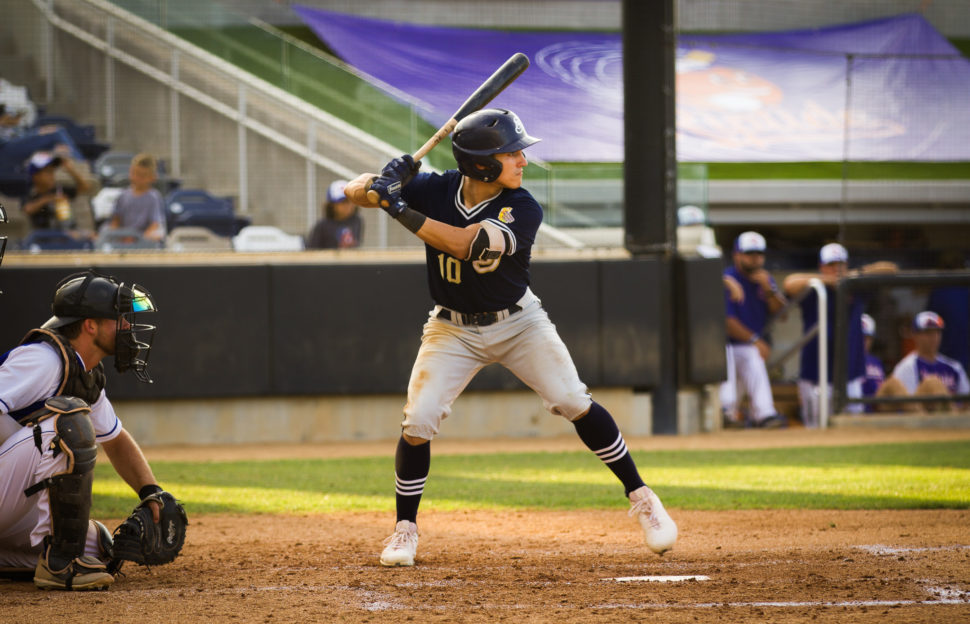 PASADENA, CA — A nearly four-hour game came to a close in the bottom of the ninth, as Arroyo Seco dropped a Friday night contest to the Orange County Riptide at Jackie Robinson Memorial Field.

Merek Sears (Washington State) started on the mound for the Saints, tossing a quick one-two-three inning.

The Riptide jumped to an early 2-0 lead thanks in part to back-to-back base hits. The runs would stop there as a double play ball to shortstop Brandon Bohning (Cal State Northridge) sent the Saints to the bottom of the second.

Bohning’s had an impressive few starts at shortstop, and emphasized how important it is to consistently field clean plays on defense.

“Defense is definitely something that has to be good, especially if you’re a middle infielder,” said Bohning. “You’re kind of the quarterback on the field, so you have to just bear down and make the easy plays, but you know the hard plays are just reacting and making the play.”

As for the offense, Jag Burden (UC Berkeley) started the Saints' rally with a line-drive off of Riptide pitcher Anthony Robie (Texas State). Bohning came up to bat and drilled an RBI single into left field to make it 2-1 Riptide.

“Simplicity is key in this game,” Bohning said. “Especially just trying to hit the ball up the middle. It’ll reward you...I think just keeping it extremely simple and trying to see the ball as long as possible.”

The Saints would strike again in the bottom of the third, as Connor Bradshaw (Pepperdine) roped a base-hit up the middle. Drew Cowley (Cal Poly Pomona) then crushed an RBI double that snuck past the left-fielder to tie the game up at 2-2.

Tommy Hannan (UC Berkeley) came in at the top of the fourth inning with one out and the Saints trailing, 3-2. A costly Saints error gave the Riptide two more runs, making it 5-2.

Opportunity came knocking for the Saints with the bases loaded in the bottom of the fourth. Arroyo Seco was unable to capitalize though as Jake McMurray (Oral Roberts) flied out to end the frame.

A one-two-three inning by Hannan set up the Saints’ offense in the bottom of the fifth.

Cowley delivered again with a single in to center field. He stole second, then a sacrifice fly by Cooper Elliot (Undecided) moved him to third. Burden dropped a single into left field as two Riptide outfielders collided to get the ball, making it 5-3.

The Riptide answered right back in the sixth inning, scoring three more runs thanks to a Saints error and three consecutive base hits. Hannan had a strikeout to end the inning, his second one of the game.

Another run scored for the Saints, as an RBI single for Bradshaw makes it 8-4.

Trevor Kniskern (Pepperdine) took the mound in the top of the seventh inning, striking out the side.

Elliot executed a leadoff bunt down the third base line to start the seventh inning. He stole both second and third, and ended up scoring on an overthrow. Another RBI single for Bradshaw kept the Saints within striking distance at 8-6.

The Riptide managed to post another run in the top of the ninth, but the Saints were unable to answer.

The Saints look to bounce back Saturday as they take on the San Luis Obispo Blues at Sinsheimer Park. First pitch is at 6 pm PST. Catch the action on the Saints Youtube and social media channels.