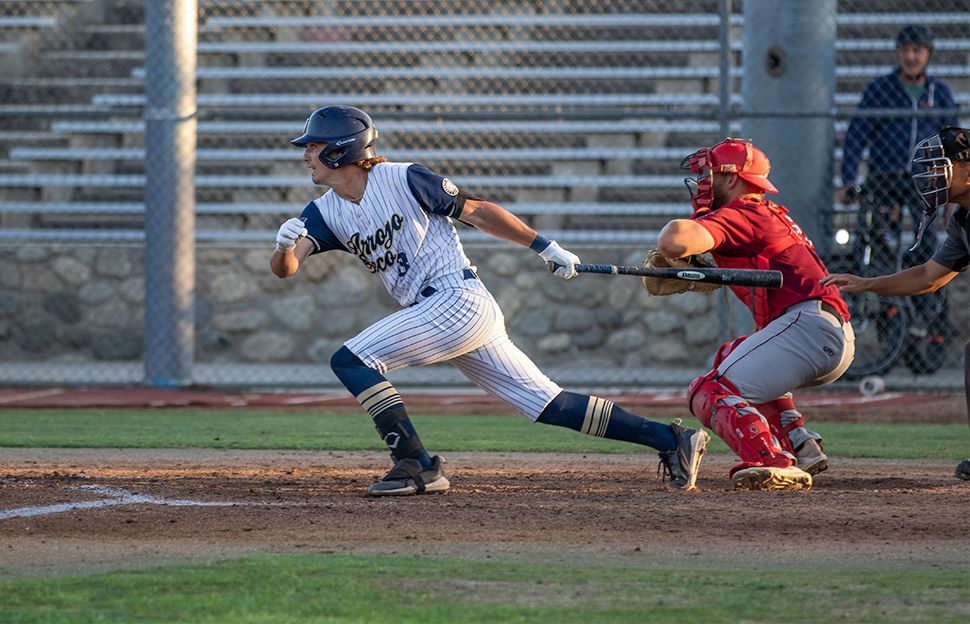 PASADENA, CA – The Saints continued the two-game homestand, hosting the Santa Barbara Foresters at Jackie Robinson Field in Pasadena, Calif. on July 13. The Saints went down early, and though they put up some runs, they could not keep up with the Foresters’ offense.

The Foresters jumped out to an early lead against the Saints, scoring two runs in the second inning.

The gap grew in the third, when Santa Barbara posted two more runs.

The Foresters scored again in the fourth, but the Saints responded in the bottom half of the inning. Kyson Donahue (Hawaii) drew a walk with one out in the inning. Matt Wong (Hawaii) then picked up a single, and Donahue advanced to third. Matt Marlow (Regis) brought the run in when a hard-hit ground ball forced a fielder’s choice and allowed Donahue to cross the plate.

The Saints built on the momentum in the fifth inning. Mitchell Scott (Cal Berkeley) had a 1-2-3 inning in the top half of the frame. Jeff Bauser (Nevada-Reno) then got the line moving with a one-out single. Bauser then swiped second and third base. Bauser’s mad dash was capped off by scoring on a wild pitch.

The Foresters scored again in the seventh, but Arroyo Seco was determined not to let that deficit grow. Jordan Rogers (Wichita St.) led off the inning with a single. Rogers stole second and third base, and then proceeded to score on an error by the opposing pitcher.

Santa Barbara scored again in the top of the eight, and the game proved to be out of reach for the Saints.

Jordan Rogers had a big game for the Saints, going 2-4 and scoring a run. Rogers felt good about his performance, but said that his game was a grind. He was proud of his team, saying “it was a tough one, but we all tried our best and that’s all you can ask for.” He said looking forward to the rest of the week, it is important to focus on taking it one game at a time. “We’ve got to take it one day at a time, it can be rough when you look at the big picture, but if you just take it one day at a time and do the little things right, we’ll be good.” With four games left in the week, it certainly seems that Arroyo Seco will be looking to do just that.

After the game against Santa Barbara, Saints’ manager Aaron Milam said that the team is in the dog days of the summer. “We just have to look at the road map and see how we finish this thing out successfully.” Milam placed importance on winning the week or splitting even on the week, saying that both of these are wins when looking at the road map. Milam reiterated that the team will be fine, and that the offense and bullpen will continue to win games throughout the back half of this season.

The Saints will close out the two-game set against the Foresters on July 14 at Pershing Park in Santa Barbara, Calif. at 6:00 pm PST. Follow along with the game on the Saints’ Facebook, Instagram, or Twitter channels, or tune into the live broadcast on YouTube!