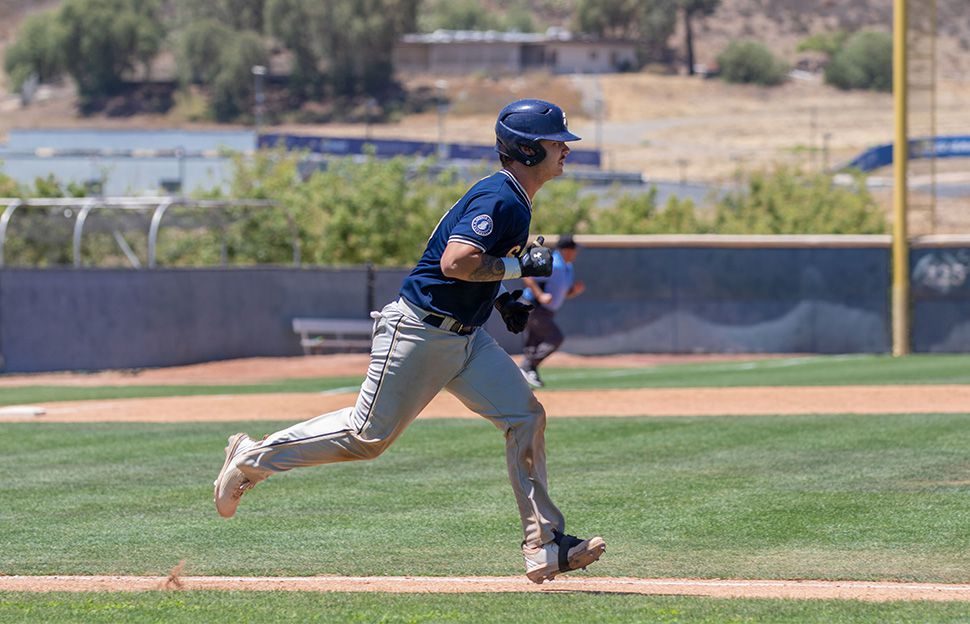 THOUSAND OAKS, CA – The Saints headed up to George “Sparky” Anderson Field in Thousand Oaks, Calif. to take on the Conejo Oaks in a Sunday afternoon matchup. The Saints jumped out to an early lead in the 3rd inning and never gave way to earn their fifth win in a row.

The game started out in a deadlock for the first two innings, with neither starting pitcher willing to give in.

Cooper Harris (Wichita State) got the party started in the 3rd inning, starting the Saints out with a single. Harris then advanced all the way to third on a pair of passed balls. Kyson Donahue (Hawai’i) brought Harris around to score with an RBI single. Matt Wong (Hawai’i) then sent a double into the outfield, bringing Donahue around to score as well.

The Oaks scratched across one run in the bottom of the 4th inning. A shutdown performance by Keegan Allen (West Virginia) and a runner caught stealing by Cooper Harris kept the Oaks from tying the game.

Cooper Harris again got the Saints moving with a leadoff walk in the 5th. Dylan Johnson (Gonzaga) kept the line moving by slapping a single into the outfield. Kyson Donahue then loaded the bases with a walk, and Matt Wong brought Harris around to score.

The Saints scored again in the 7th when Dylan Johnson reached on a hit by pitch. He moved all the way around to third when a failed pickoff attempt led to an overthrow. With Johnson standing on third, a wild pitch by the Oaks brought him around to score, extending the lead to 4-1.

Conejo made things interesting in the bottom of the 7th inning, scoring two runs to trim the lead down to one.

Caleb Reyes (Occidental) struck out the side in the bottom of the 8th, holding the one-run lead.

The Saints had a big 9th inning, posting three more runs. For the third time, Cooper Harris got the Saints moving with his second walk of the game. Dylan Johnson then sent a double out to put runners on second and third. Peyton Holt (Arkansas) grabbed his first hit of the day, driving in both Harris and Johnson. Holt then stole second, and Matt Wong picked up his third RBI, driving in Holt for the Saints seventh run of the game.

The Oaks kept Saints fans on their toes, making it close by scoring two runs in the bottom of the ninth. Caleb Reyes shut the Oaks back down earning his first save of the year.

The Saints defense should be commended, only allowing three earned runs and striking out twelve in the contest against the Oaks.

Cooper Harris scored three of the Saints’ seven runs in the game against the Oaks. Harris said his focus is getting on base. “I think that’s my strength … just trying to help my team win that’s basically what I’m trying to do.” Harris also said that having faced Conejo a number of times before has helped the Saints figure out how to pitch to the Oaks, which contributed to the high number of strikeouts.

Dylan Johnson had a big game, and spoke about team win. Johnson said, “Their guy had a good splitter, we all saw it. Everyone worked as a team to figure that out.” He also spoke to the pitching staff, and stated that they have had a great work ethic in recent weeks which has helped lead to a successful Week 5 of CCL play.

Amidst recent success, Saints’ skipper Aaron Milam is focusing on keeping things simple. After the successful five game stretch, Coach Milam is only focused on the next game, “Tuesday is another day, we’re worried about Tuesday at this point … we’ll worry about Wednesday after that.” That Saints are certainly on a roll as of late, and fans are certainly excited to see what the team does going forward.

The Saints next game will be against the Conejo Oaks again on Tuesday, July 12 at 6:05 p.m. PST back home at Jackie Robinson Memorial Field in Pasadena, Calif.