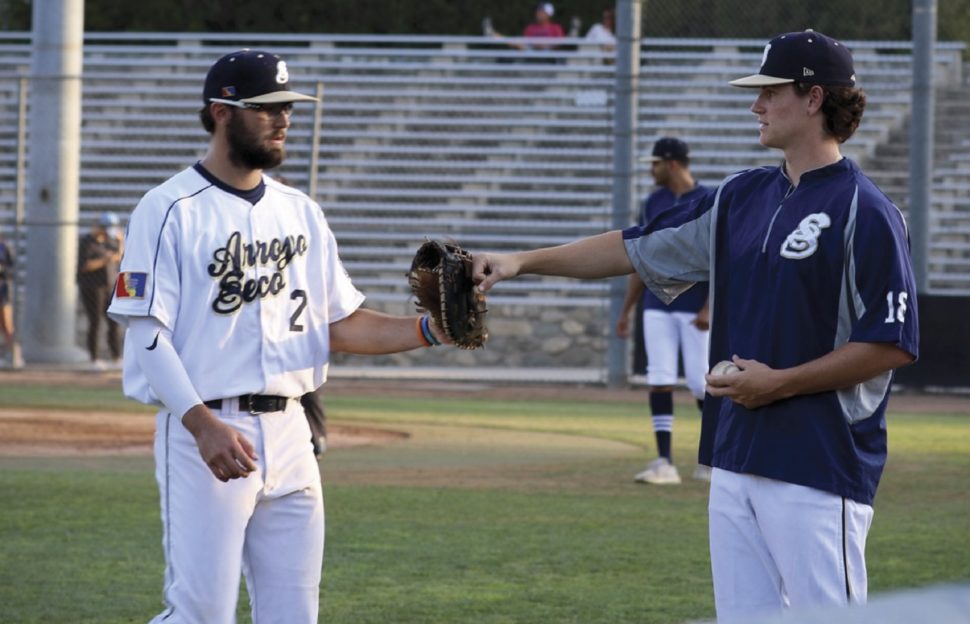 “That’s the easiest game I’ve caught in a long time,” Saints catcher Tanner Lindsly (Oral Roberts) said. “When your pitchers are filling it up early, filling it up with offspeed, keep the hitters guessing. I mean, I didn’t have to work too hard at all today.”

With the easy day on defense, Lindsly put his work in at the plate, going 4-for-5 with one RBI and one run scored. Lindsly’s college teammate, first baseman Jake McMurray, also had four hits to go with an RBI and run scored. Right fielder Peyton Lewis (Texas State) generated the most runs, finishing with three RBI and two runs scored.

To open the game, Sears allowed a hit following a gritty 11-pitch at bat, but he got out of the inning cleanly with one strikeout.

The Saints were first on the board thanks to a single from McMurray in the two-spot. After making it to third off an error in the next at bat, Lewis sent a sacrifice fly to left center field to put the Saints up 1-0.

“Coming up after the break, kind of with our foot on the gas, was a little bit encouraging, so hopefully that can continue,” McMurray said.

Lewis delivered again in the second, this time defensively. He showed off his arm in the top of the second, gunning down Oaks catcher Kaden Tsuji at third to end the frame.

A quick third inning from Sears kept the Oaks blank, and third baseman Drew Cowley’s (Cal Poly Pomona) leadoff double got the offense going again. Cowley came home to score on Lewis’ second RBI of the night, a double that curled down the first base line into deep right field.

A Bo Willis (Northwestern State) single and Jag Burden (UC Berkeley) walk loaded the bases, and Lewis scored on a wild pitch. Willis came home off a sacrifice fly from shortstop Brandon Bohning (CSU Northridge), and Lindsly upped the lead to 5-0 with an RBI single for his second hit of the night.

McMurray raked an RBI single with the bases loaded again, and Cowley brought second baseman Jackson Cobb (Crowder) home with a sacrifice fly in his second plate appearance of the inning to put the Saints up 7-0.

Sears needed just six pitches to get out of the fourth, including two one-pitch outs. The Saints got their eighth run when Cobb was walked with the bases full. Lindsly’s third hit of the game, all opposite field singles, set up the bases loaded situation.

“I hadn’t hit a ball into left field hard since I was probably 12. I’ve always been a big pull guy lately, but it felt good seeing the ball deep. Just had to stay loose up top,” Lindsly said.

Burden got the top of the fifth started with a diving catch in left field to record the first out, and Vizcaino dealt two strikeouts in a row to make quick work of the Oaks.

Between Sears, Vizcaino and Sonduck, the three hurlers retired 11 consecutive batters between the second and fifth inning, and maintained the 8-0 lead through five.

Lewis ripped his third RBI in the seventh to drive Cowley home from first and improve the lead to nine. A passed ball with the bases loaded allowed Lewis to come in and score the team’s 10th run.

Sonduck recorded his third and fourth strikeout in his third inning of work to keep the Oaks scoreless through eight innings.

The Saints loaded the bases again in the eighth, but stepped off the gas to keep the score 10-0 entering the final frame, where Navarette made his Saints debut in the ninth and retired three of five batters to secure the shutout.

The Saints travel to San Luis Obispo to take on the Blues. First pitch is at 6 pm PST.

“We played [the Blues], I think, three times. It’s been a good game every single time. It’s just gonna take good pitching, and we hit like we did tonight, we should be alright,” McMurray said.

Highlights From Saints 10-0 Win Over the Conejo Oaks