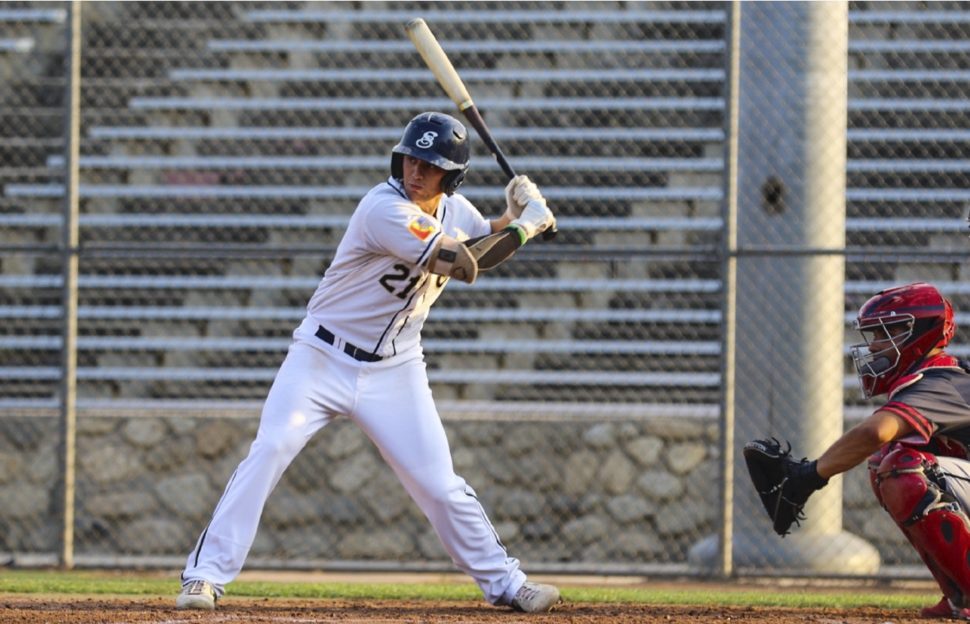 PASADENA, CA – After three games of non-conference play, the Arroyo Seco Saints squared off against a California Collegiate League (CCL) opponent for the first time this season. The North division’s Walnut Creek Crawdads had no answer for starting pitcher Saxon Andross (Cal State Los Angeles) and company, leading the Saints to a 7-0 shutout victory.

“We’re just looking for guys to throw strikes,” Saints manager Aaron Milam said. “Control the controllables, we tell them all the time. So what can they control? They throw the ball to the plate.”

Third baseman Drew Cowley (Cal Poly Pomona) was perfect in the batter’s box, going 3-3 with one RBI and one run scored. Andross allowed three hits in three innings pitched, striking out one and picking off a runner to end the top of the first.

The Saints wasted no time getting the bats going. Consecutive hits from leadoff man Jackson Cobb (Texas Tech) and Cowley set up right fielder Jag Burden (UC Berkeley) to send a double to left center field, scoring both runners to give the Saints an early 2-0 lead.

Jag was not done burdening the Crawdads; the right fielder stole third, then strolled home after a passed ball to add another run.

Andross dished another scoreless inning in the second, and the Saints added to their lead. Shortstop Brandon Bohning (Cal State Northridge) walked in his first plate appearance and stole second to get in scoring position. Cowley ripped his second hit of the day to right, allowing Bohning to reach home.

“It’s been an adjustment for me, just getting back to get my timing down, and I was lucky tonight to be able to put a few good swings on the ball,” Cowley said.

Andross finished his night with a clean third inning, allowing just one hit, but the runs kept coming for the Saints. Center fielder Cooper Elliot (Wichita State) launched a two-out knock to bring home catcher Bo Willis (Weatherford), and Bohning played copycat to up the lead to six runs.

The Crawdads got two runners on base in the top of the fourth and looked poised to get on the board.

After slinging a highlight reel putout assist from left field the night before against Ventura County, Cowden shot another dart to Willis at the plate just in time to keep the Crawdads blank to end the fourth.

Kyle Sonduck (UT San Antonio) struck out three batters in his three-inning relief appearance, and left fielder Jack Grace subbed in to make the Saints’ run total match his jersey number, squeaking a single to left to give Arroyo Seco a 7-0 lead in the bottom of the sixth.

Derek Yoo (Columbia) kept the shutout rolling with three strikeouts in the eighth, and Daniel Ritcheson (San Diego State) brought the heat in the ninth, striking out the side to bring his season total to six in just two appearances.

Arroyo Seco now stands 4-0 on the season overall, and the team will travel to Palm Springs for a back-to-back away series against the Palm Springs Power on July 18 and 19. Both games start at 7:05 pm PST, with temperatures expected to reach highs of 118 degrees.

“It’s gonna be quite a road trip,” Milam said. “Little bit of heat there, but we’ll be ok.”

Player of the Game – 3B Drew Cowley (Cal Poly Pomona)