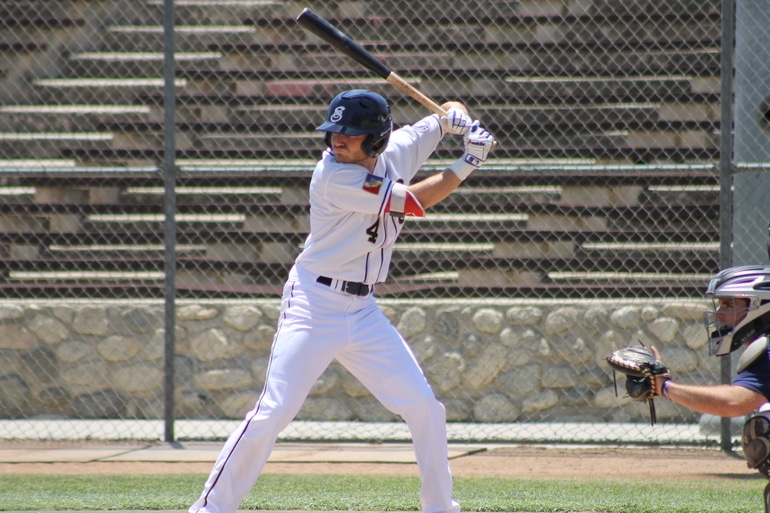 PASADENA, CA– After battling back from a big deficit, The Saints (2-3, 2-2 CCL) lost to the Santa Barbara Foresters (4-0, 2-0 CCL) at Jackie Robinson Memorial Field on Tuesday night by a final score of 11-7. The Foresters bats were on fire from the moment they stepped off the bus. Santa Barbara came into the game already boasting the top offense in the California Collegiate League, scoring an average of over eight runs per game, and showed the Saints their firepower first-hand from the moment the game had begun.

Before the Saints could record an out, the Foresters attacked starter Timothy Post (0-1) for a pair of singles and walk. With the bases loaded catcher Chase Illig delivered the first run with a fielder’s choice. A base hit by shortstop Utah Jones added a run, and another single, this one by third baseman Ryan Cash, scored an additional two runs. Santa Barbara lead 4-0 after batting around in the first inning. A three-run shot by Illig in the second inning, his second long-ball of the season, ended Post’s night early. He left with a line of two innings pitched and seven earned runs allowed. The onslaught didn’t end there as Santa Barbara added another three runs against reliever Wyatt Kelley in the third inning to push their lead to 10-0.

The Foresters were just as aggressive on the bases as they were at the plate, stealing a season-high nine bases, and earning the ire of the players and coaches in the Arroyo Seco dugout.

With runners on the corners and two outs, and Santa Barbara then leading by ten, the Foresters again stole second base. This lead to a series of angry words exchanged by members of the Arroyo Seco side directed at players and the Santa Barbara coaching staff. The umpires had to step in to keep the peace, but coaches on both sides continued to argue as the game entered the bottom-half of the third inning.

That may have been the jolt necessary to shake the Saints out of their early funk. But then trailing by ten runs, Arroyo Seco was faced with the challenge of battling back after digging themselves a sizable hole.

“At that point, you really don’t have anything to lose” said pitcher JD Russomano, who held down the fort, pitching three scoreless innings in relief with four strikeouts. “Knowing that something is not in your hand and not in your favor, you just don’t really put any stress on yourself.”

The entire Saints’ squad seemed to be playing free and easy after falling down early and returned a strong counterpunch in the third. Designated hitter John Thomas got Arroyo Seco on the board with an RBI single. First baseman Cooper Williams followed with an RBI single of his own, and a passed ball scored Thomas to make it 10-3 with still nobody out.

After getting the first out on a foul popup, shortstop Drew Cowley stepped up to the plate and grounded a routine ball to Forester’s first baseman Luke Coffey, who booted it and then threw it away, allowing another two runs to score. The Saints scored a sixth run in the third after another passed ball.

Entering the fourth inning, Arroyo Seco had rallied to make it a 10-6 game.

“You just find a way to keep grinding, keep going,” said Russomano. “You just thank God for the opportunity to ball out [with my teammates].”

Kelley and Russomano’s efforts in relief held the potent Forester offense in check and allowed the Saints the chance to stay in the game. Arroyo Seco would score another run in the bottom of the sixth to make it 10-7. That would be all, however, as the Saints offense would be shut down the rest of the way.

The Foresters added an insurance run in the ninth to bring the score to 11-7.

The winner of tonight’s game for Santa Barbara was Brad Demco and the losing pitcher was Timothy Post.

The Saints will have another opportunity to hand the Foresters their first loss of the season with a second game against the squad on Wednesday at Jackie Robinson Memorial Field at 6:05 PM. They then take on the Ventura County Pirates in a non-league matchup on Thursday.