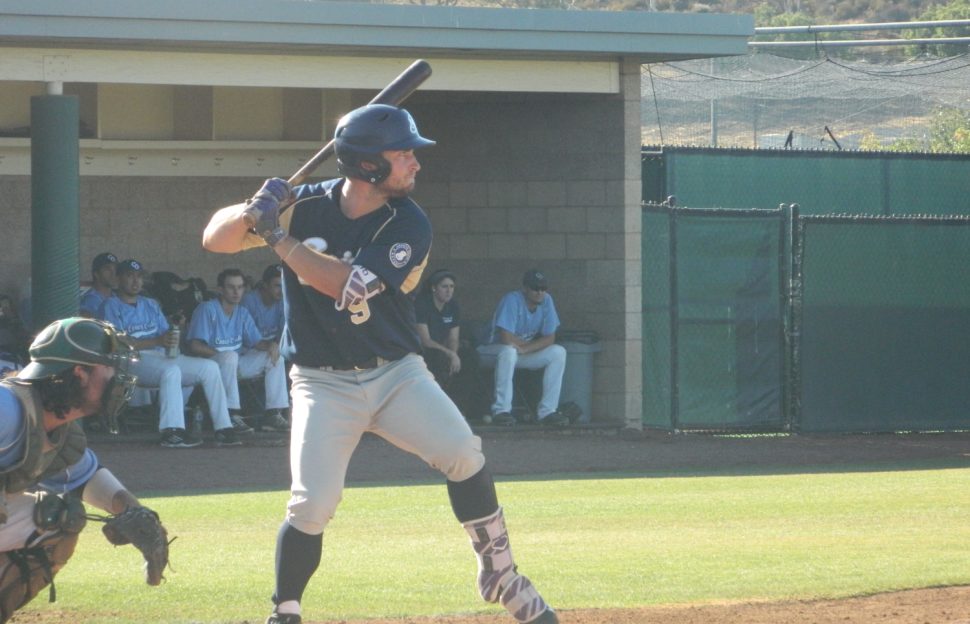 VENTURA – The Saints took a one game road trip to take on the scuffling Ventura County Halos and made the most of it, pounding out 17 hits and taking advantage of four Halo errors to cruise to

a 12-4 win.
Arroyo Seco hit the ground running and pummeled Halos starter Dayton Provost for three walks and two hits to take a 2-0 lead in the first inning. The Saints would only add on in the second inning, with back to back to back doubles by Gabe Chavez, Tyler Durna, and Blake Burton sending Provost to the showers and staking the Saints to a 5-0 lead.

“It’s not giving up any ABs [at bats],” Saints Head Coach Anthony Chevrier said when asked about the Saints hot start. “The guys did a good job being selective and patient and sticking to the plan and executing the plan with some hard contact and in turn we ended up putting up a good crooked number and running away with it.”

Tim Turner made his first start for the Saints after spending the season in the bullpen and looked very comfortable pitching with the lead as he started out with two shutout innings to go along with three strikeouts.

“I was prepared and [have] taken pride in preparing myself all year to be ready for whatever situation I got put in,” Turner said when asked about making his first start. “I just wanted to do a good job for the team.”

After giving up a pair of runs in the third, Turner recovered with a scoreless fourth inning before turning the game over to a Saints bullpen that pitched four innings of two run ball to secure the win.

The Halos tried to rally, and did so, pulling to within 6-4 on a two run blast off of Lowell Schippers that hit the scoreboard in the sixth inning. Arroyo Seco had not scored since the fourth inning, but after the Halos and Saints traded scoreless seventh innings, Gabe Chavez singled to lead off the eighth inning and would add a second single later in the inning as the Saints exploded for six runs and seven hits and batted around their lineup.

“I was seeing the ball very well,” Chavez said. “All of us were. All of our legs were feeling pretty good today cause we got a lot of rest last night.”

The Halos had showed they would not go quietly in attempting to come back down 5-1, but finding themselves down 12-4 was just plain deflating. Dellan Raish came in and set the Halos down in order in the eighth inning that turned out to be the last inning, as the game was called due to lack of light.

Big Play Blake: Blake Burton came into today’s game the team RBI leader, and did not disappoint. His first inning sacrifice fly put the Saints on the board, allowing Tim Turner to pitch with the lead, and his second inning double plated another run and was instrumental in chasing Halos starter Dayton Provost from the game.

Leadoff Legend: All good leadoff batters can get on base and set the table for the middle of the order guys, and Gabe Chavez did just that. He hit three singles and a double, and scored three out of the four times he was on base. Chavez also made a stellar play at second base, backhanding a ground ball hit up the middle and throwing to first in time to rob the Halos of a base hit.

“They weren’t ready to play, but we were. Pretty much it goes whoever is ready to play is going to take the ballgame.” – Saints second baseman Gabe Chavez.

The Saints have a day off tomorrow, but are back in action on Tuesday when they take to the road to play the SoCal Catch at 4:30 p.m.