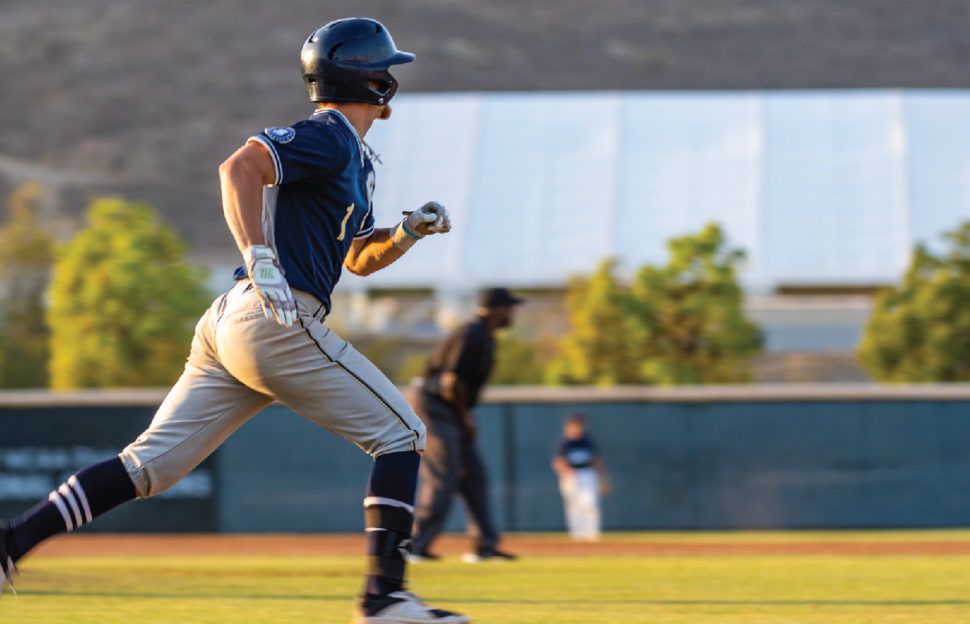 Tommy Steier (Creighton) took the hill for the Saints. The right-hander had an excellent outing, striking out seven batters in six innings.

Though the Oaks took an early 1-0 lead in the second inning on a sacrifice fly, that would be the only run Steier would allow. He also got out of a jam in the third inning, and struck out a batter on an off speed pitch with a full count.

The third inning jam wasn’t the only test for Steier. In the sixth, the home plate umpire got hit in the mask with a tipped foul ball, and didn’t return to the game. It resulted in a ten-minute delay, but that didn’t seem to rattle him. Steier returned to the mound, and threw back-to-back strikeouts to end the inning.

On the offensive side, Jackson Cobb (Crowder College) had an outstanding 3-for-4 performance at the plate just nearly missing hitting for the cycle. The second baseman had an RBI single, RBI double, and slammed a solo home run into right field to tie the game up at one a piece.

“I was at a 3-2 count, and I was honestly expecting a fastball,” Cobb said. “But he threw me a slider, and I stayed back on the pitch and got a barrel on it.”

The Saints bats added two more runs in the top of the fifth inning. Brandon Bohning (Cal State Northridge) started the rally off with a stand-up double. Cobb's RBI single into left-field to made it a 2-1, Saints

A balk from Cody Adcock (Ole Miss) advanced Cobb to third, but the umpires overturned the call and made Cobb go back to second. Head Coach Aaron Milam argued his case and would eventually be thrown out of the game.

The intensity heated up after the overturn, with chirping back and forth from both dugouts. Cobb described the playoff atmosphere heading into the last stretch of the season.

“Our coach always wants the call to go with us, but it didn’t go our way so it got a little heated,” Cobb said. “But that happens a lot, especially in the playoffs. We just have to deal with it, and keep on going during the game.”

The call ultimately didn’t matter, as Cobb scored anyway on an RBI single up the middle from Jake McMurray (Oral Roberts).

The eighth inning rolled around, and the Saints were able to add on to their lead. Peyton Lewis (Texas State) was hit by a pitch to set up Josh Cowden (BYU). Cowden crushed a two-run homer into right-center field to give the Saints a four-run lead. Cobb delivered again with an RBI double, followed by an RBI single from Connor Bradshaw (Pepperdine).

Tommy Hannan (Cal Berkeley) came in and didn’t allow the Oaks to creep back into the game. Hannan got out of the bases loaded jam, and helped maintain the 7-1 Saints lead.

Rashad Ruff (Coppin State) closed the game out for the Saints. Ruff gave up a solo home run, but settled down immediately after, as he struck out the side to end the ball game.

After a loss to the Barons on Wednesday, Cobb knows how resilient this ball club is with the CCL playoff race heating up.

“Honestly, we’re just a really good ball club,” Cobb said. “When we hit, everybody hits. Everybody just follows behind one another, and we can put up a lot of runs on the board.”

The Saints have a crucial game tomorrow, as they travel to Santa Barbara to take on the Foresters. The Saints and Foresters are currently tied in first place in the CCL South Division. First pitch is at 6 p.m. PST. Catch the live stream on the Saints Youtube channel.

Highlights From Saints 7-2 Win Over the Conejo Oaks