Round No. 2 of Saints-Blues Goes to San Luis Obispo 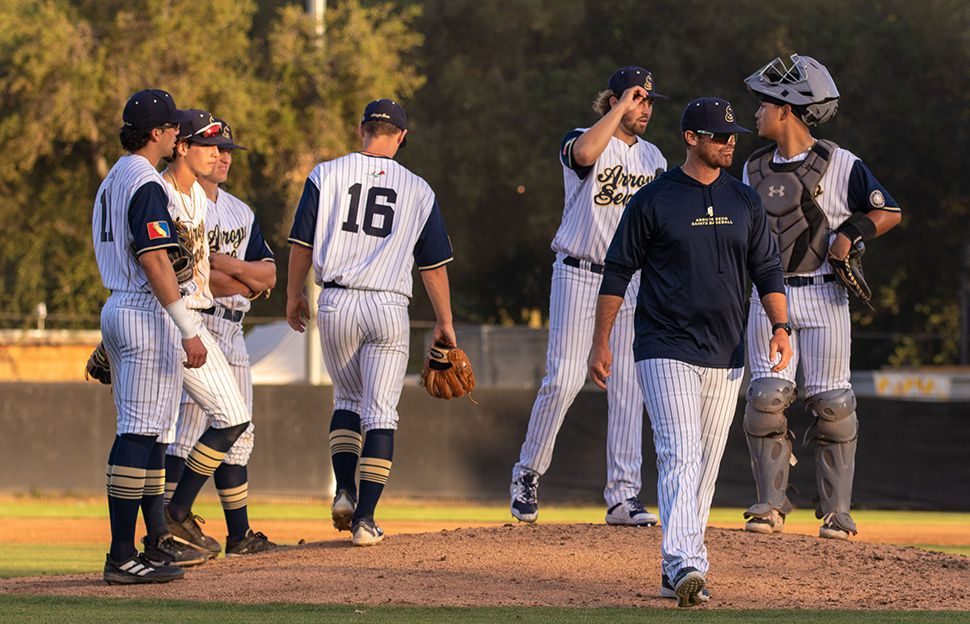 PASADENA, CA – The Arroyo Seco Saints faced-off against the San Luis Obispo Blues in a midweek contest at Jackie Robinson Memorial Field in Pasadena, Calif. After tying the game early, the Saints lost the lead in the 6th inning and were not able to regain it.

After giving up two runs in the top of the 1st inning, the Saints responded with an RBI line drive single by Matt Wong (Hawaii) that scored Max Blessinger (Pasadena CC). A sacrifice fly by Nathan Becker (Rice) that allowed Kyson Donahue (Hawaii) to score knotted the game at 2-2.

The Blues were then able to scratch across a run in the 4th inning after drawing a walk and scoring a runner on an RBI double.

The Saints again tied up the game in the bottom of the 5th inning. A single through the left side by Matt Marlow (Regis) led to Max Blessinger picking up an RBI single.

The Blues took the lead for good after putting up a 3-spot in the 6th inning.

An impressive 5-strikeout, 1-hit performance in the 6th and 7th innings by Saints’ right-handed pitcher Anthony Giannette (Louisiana Tech) was a bright spot for the Saints. The Blues went on to score five more before the game was over.

Saints’ manager Aaron Milam said that the team needs “to take care of the little things.” Milam stated that the Saints “have a lot of guys that can do a lot of things.” While the coaching staff is still figuring out who can do what early in the summer season, the diversity of skills on the team will benefit the Saints moving forward.

Milam also noted the team’s focus on what he calls “the Freebie War.” He stated the importance of getting more free bases than you give away, and that winning these individual situations can lead to the team winning more games.

Matt Wong spoke about his recent success, with an emphasis on a “focus on the mental part… believing in yourself, having confidence.” Wong certainly plays with confidence, and this is reflected in his view of the team as a whole. When asked about the trajectory of the team for the rest of this season, Wong said he is “not worried at all.”

The Saints will be back at home on Friday, June 17, at 6:05 p.m. PST against the Orange County Riptide. Tune-in to the Saints’ YouTube and social media channels to follow the action live.