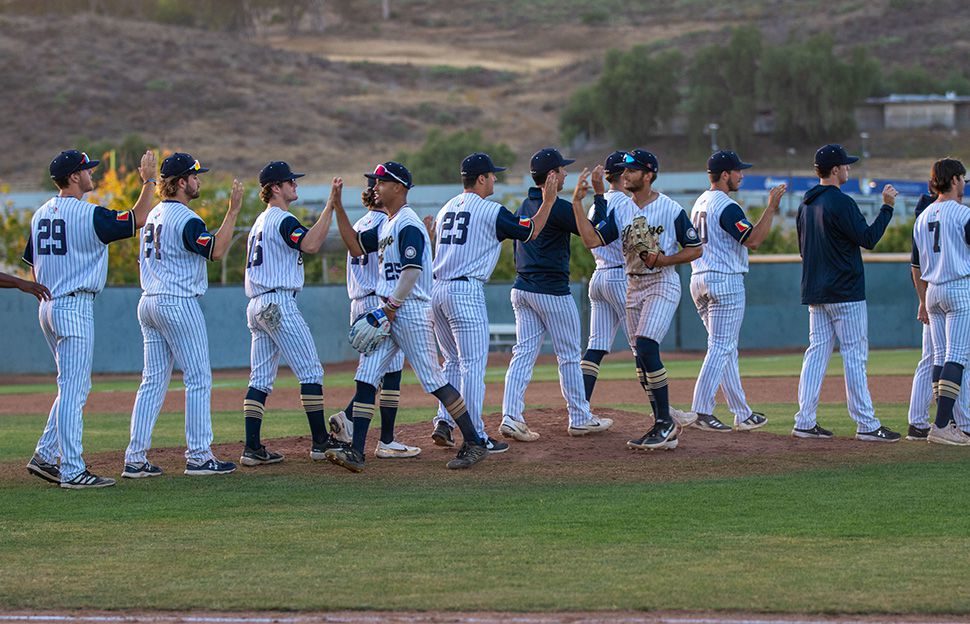 THOUSAND OAKS, CA – The Arroyo Seco Saints took on the Conejo Oaks in a Sunday evening matchup at Sparky Anderson Field on the California Lutheran University campus in Thousand Oaks, Calif. The game was highly contested through the early stages of the game, but the Saints took the lead in the 6th inning and never gave it back.

The Saints were not able to score any in the top of the first inning, and the Oaks quickly capitalized with two runs in the bottom half.

The Saints were able to chip away at this deficit in the second inning when a single by Jeffrey Bauser (University of Nevada-Las Vegas) led to an RBI double by Jashia Morrissey (Long Beach State) that drove him in. The Saints were then able to hold the Oaks scoreless in the bottom of the second

This confidence led to a very successful top half of the 3rd. The Saints rallied after quickly tallying two outs to start the inning with a Nathan Becker (Rice) walk. Jordan Rogers (Wichita State) kept the line moving with a single, and Jeffrey Bauser singled again to load the bases. Cooper Harris (Wichita State) then worked the count to earn an RBI base on balls to tie the game. The scoring was capped off by a Jackson Walker (Louisiana Tech) squeeze bunt single to take the lead. The Oaks responded in the bottom of the inning tying the game back up at three apiece.

The Oaks then took the lead in the 4th inning after putting up a pair of runs. The Saints did not intend to go down this easy, responding in the 6th inning with 4 runs. This barrage began with Cooper Harris being hit by a pitch, and a single to right by Jashia Morrissey that turned into a 2-run little league home run. This was followed up by a long ball by Kyson Donahue (University of Hawaii). The inning was capped off by a single by Peyton Holt (University of Arkansas) who was then able to steal second, and advance to third base on a wild pitch. Nathan Becker was then able to hit an RBI single to bring him in.

The 6th inning became the turning point in the matchup when Cole Dale (University of California-San Diego) shut down the Oaks in the bottom of the innings to solidify their lead.

The Saints added on in the 7th when Cooper Harris shot a single into right field. After advancing to second on an error and stealing third, he was in prime position for Matt Marlow (Regis) to slap a single and bring Harris around to score. The Oaks were able to respond with one run in the bottom in the inning.

The Saints piled on two more in the 8th inning after a bases loaded double by Jashia Morrissey brought Nathan Becker and Jeffrey Bauser across to score. The Oaks again responded with two runs of their own.

The final nail in the coffin was in the top of the 9th inning, when Peyton Holt picked up a single, and a Nathan Becker double brought him around to third. Holt then took home on a wild pitch, and Becker was able to cross the plate after a single by Jordan Rogers.

After reaching base in 5 of his 6 at bats with 3 walks in the game, Cooper Harris spoke of the importance of having a better pitch selection. He also said, “Me and Coach Milam have been working on staying short”. He said that this has helped him from lunging at the ball earlier, and in turn helped him slow down his at bats.

Nathan Becker had a big game, and said he was able to make adjustments after sitting down to watch film of his past game and make adjustments to his swing. When asked about these adjustments, Harris said, “he has to keep back and stay through the ball.” He emphasized this, and wanting to hit the fastball better.

Finally, when speaking with Saints’ manager Aaron Milam, he stated the importance of not letting the Oaks score after the Saints’ big four-run inning in the 7th inning. He said that he told Cole Dale afterward that “that frame won the game for us”.

The Saints are back at home in Pasadena on Tuesday, as they are slated to take on the Santa Barbara Foresters at 6:05 pm PST. Follow the action on the Saints’ YouTube and other social media channels.