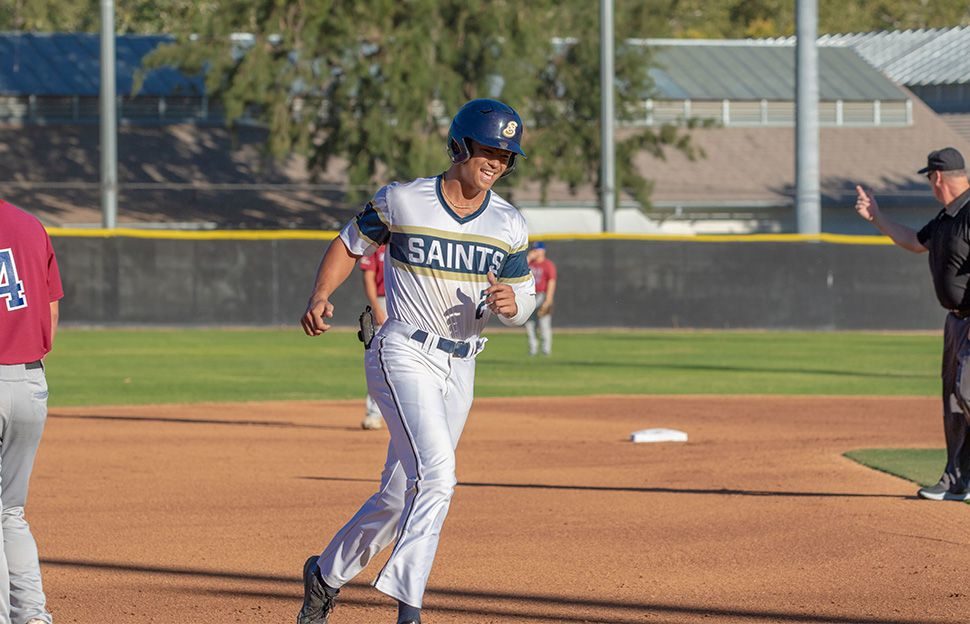 PASADENA, CA – The Saints’ offense stayed red-hot against the Santa Barbara Foresters on Thursday night in Pasadena, putting up 13 runs for the second consecutive game and cruising to a 13-6 win.

Arroyo Seco’s bats got going early, as Matt Marlow (Regis) sent a three-run bomb over the left field wall in the first inning. While the Foresters scored a run in the third, Matt Wong (Hawaii) extended the Saints’ lead in the bottom of the frame with a homer of his own, making it a 5-1 ballgame.

The offensive onslaught would continue in the fifth when Dylan Johnson (Gonzaga) slammed a single into left field with the bases loaded, scoring Kyson Donahue (Hawaii). The next batter, Jordan Rogers (Wichita State), drove in three more runs with a double, increasing the Saints’ advantage to 9-2.

During the sixth inning, fellow Shocker Cooper Harris (Wichita State) made the most of two Foresters errors, scoring an unearned run and helping the Saints put double digits on the board. Arroyo Seco took a commanding 11-2 lead when Donahue recorded his second hit of the evening, which allowed Drew Cowley (Oregon) to cross home plate.

The Saints would run into some trouble when the Foresters put up a four-spot in the seventh. However, strong pitching from reliever Caleb Reyes (Occidental College) helped the home team escape the inning without any additional damage.

Reyes and Mitchell Scott (California) were able to shut the Foresters down for the remainder of the game, pitching a combined 2.2 innings, recording five total strikeouts and allowing no hits.

Wong capped off the Saints’ offensive explosion in the eighth, when he launched his second two-run homer of the night into left-center field.

The Mililani, Hawaii native had an exceptional outing at the plate, going 3-4 with two bombs and four RBI. And Wong believes that his mental approach was a major contributor to his success on Thursday.

“I was confident and I was just believing in myself, and that’s pretty much all it takes to be a good hitter in my opinion…,” said Wong. “Once you can control the mental game, it does a lot for you.”

After a pair of tough losses to the Blues and Riptide, Arroyo Seco has now won two straight games in convincing fashion. Marlow had an explanation for the Saints’ recent surge, saying that a team sometimes needs a ‘reset’ to get back on track.

“Sometimes it takes a reset to just get going again, and we’ve had success these past couple games, so I like where we’re going,” Marlow said.

“Cole [Dale] was real good to start it, Boyce got some big outs in there for us, and Caleb [Reyes] is a competitor, man,” said Feasler. “And then Mitchell [Scott]… he was good at the end, too. He’ll be a good backend bullpen arm for us.”

Despite stringing together two consecutive victories, Feasler doesn’t want the team to get too far ahead of themselves, as he said the Saints are currently “lukewarm” but are trending towards being hot.

Arroyo Seco will look to make it three wins in a row on Friday when they visit the Orange County Riptide in Irvine, Calif. at 6:35 p.m. PST. Follow the action on the Saints YouTube and other social media channels.