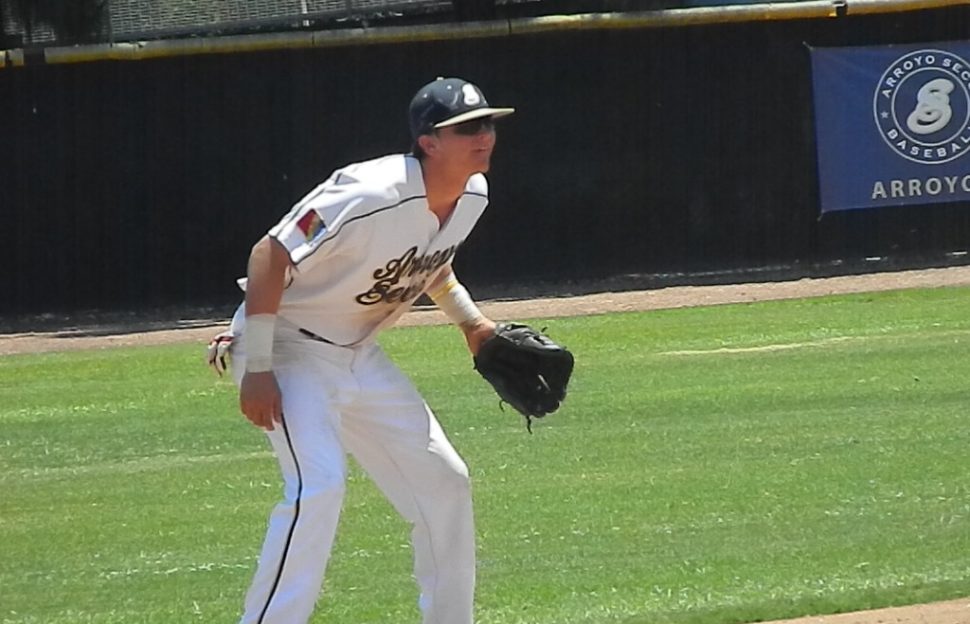 (Pasadena, CA) The Arroyo Seco Saints are off to a good start this summer in the CCL (California Collegiate League). After shutting out the Orange County Riptide in their season opener, the Saints defeated the MLB Academy Barons 4-2 at home to advance to a record of 2-0.

The Saints wasted no time getting themselves on the scoreboard. In the bottom of the first, Arroyo Seco left-fielder Spencer Mossburg (Lee University) hit a double that brought in third baseman Gabriel Chavez (CSU San Bernardino) from first, giving the Saints the first run of the game. First baseman Corey Harrell (Graceland University) hit a single, bringing Mossburg to third. Harrell was thrown out while attempting to steal second, giving Mossburg the opportunity to steal home base, and giving the Saints a 2-0 lead.

“In this second game, I think guys were a little more comfortable, seeing the ball a little better, getting the timing down, and we were a little more aggressive,” Mossburg said.
Saints assistant coach Matt Stone expressed that he was pleased with how the team started offensively, believing that the Saints sent a statement to their opponent.

“We put up two right away [in the first inning] and we kind of sent the message, hey, we’re playing and swinging the bats,” Stone said. “A big part of today’s game is that we also had a few two-out hitting situations. Two-out hitting is going to win us games, and that’s the biggest thing. We gave up a run here and a run there, but we came back and scored both times.”

In the top of the second, Joseph Argumedo scored the only run for the Barons, cutting the lead to 2-1. The Barons struggled to find any offensive rhythm after this however.

In the fourth inning, Saints DH Joshua Magee (Faulkner University) hit a double and was able to steal third base before being brought in off a hit by catcher Mitch Kerner (Emory University), giving Arroyo Seco a 3-1 lead.

The very next inning, Harrell hits an RBI single, bringing home Mossburg from second base, giving the Saints a 4-1 lead.

At the top of the seventh, the Academy Barons threatened to take the lead after collecting a few hits to load the bases. Saints pitcher Gordon Ingebritson (Coastal Carolina University) ended up walking a Barons batter, allowing Bruce Martin to score from third. making the score 4-2. Ingebritson was able to strike out the next batter to end the inning and keep the Barons under control.

The Saints did not give the Barons a chance to come back in the final innings, as part of a strong defensive effort. Both coaches and players credited the dominant play of their pitchers after the game.

“I’m very proud of the way our pitchers have gone out and attacked hitters early in the season,” Stone said. “I’m really happy that our pitchers have attacked the zone and gone after guys, and that we haven’t given up a lot of walks. I think that’s a big key for us – we’re not giving up free bases to guys. They’re coming in and shutting it down, they are hitting their spots, making their pitches and doing what they’re supposed to do.”

Joshua Magee explained that great pitching is always needed, especially at times when offense may struggle or be inconsistent.

“We can pitch. We got a lot of guys who can just go out there, throw strikes and attack hitters.” Magee said. “It’s the little things. We want to score runs but the bats don’t always show up, and sometimes when bats don’t show up, you’re going to have to show up on defense and pitching.”

Mossburg served as the best offensive player for the Saints, going three for four at bat and scoring two runs along with one RBI. He also had two stolen bases on the night.
“It was a good day as we obviously got the win. As a team, we competed well and I just tried to stay aggressive today. In baseball, when you stay aggressive, big things happen, so that was the key of the day for me,” Mossburg said.

With two wins under their belt, the Saints will head out for their first road game of the season against the Ventura Halos at 5 p.m. tomorrow.