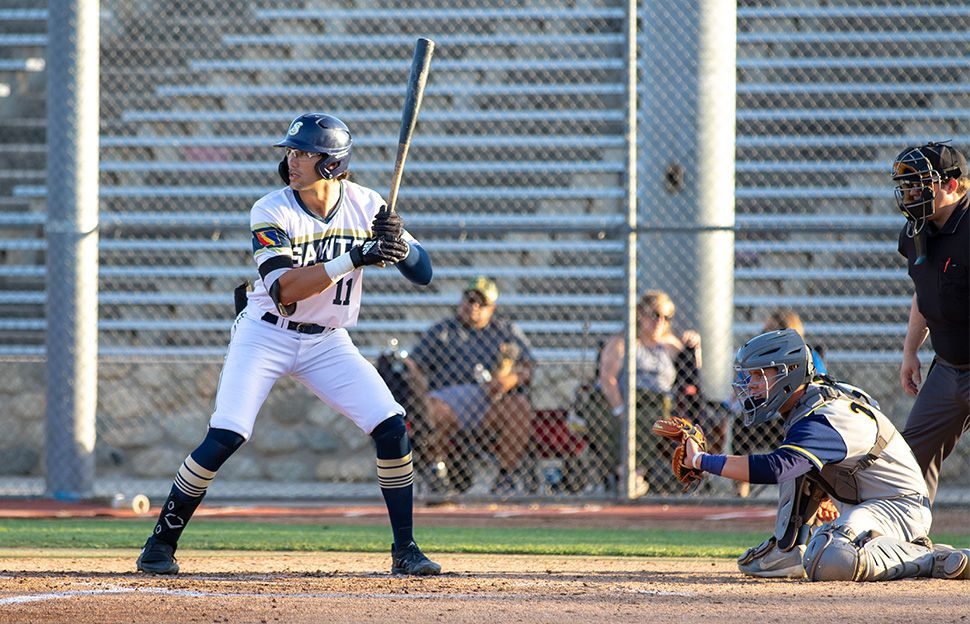 PASADENA, CA – The Saints earned their first victory of the 2022 season in come-from-behind fashion, putting up five runs in two innings to defeat the San Luis Obispo Blues by a score of 6-5.

Arroyo Seco faced an early deficit, as the Blues led 3-0 after four innings. But the home team would get on the board in the fourth when Jordan Rogers (Wichita State) popped a single into right field, driving in Jeff Bauser (Nevada) and providing his team with a spark.

Stellar pitching from left-hander Christopher Stamos (California) kept the Saints in the game. Despite conceding a run to give the Blues a 4-1 lead, Stamos looked dominant on the mound in 2.0 innings pitched, allowing just two hits and striking out six of the nine batters he faced.

In the fifth inning, the Saints’ offense came to life. Matthew Wong (Hawaii), Bauser and Cooper Harris (Wichita State) all had RBI base hits to tie the contest at four. The momentum would carry into the sixth, as Kyson Donahue (Hawaii) came up to the plate at a pivotal moment in the game.

With one out and Jashia Morrissey (Long Beach State) on first, Donahue ripped a triple down the first base line, allowing the speedy Morrissey to easily score, giving the Saints a 5-4 lead. The shortstop didn’t seem to have any rust after missing the last two games due to injury. Despite some early nerves, he was able to quickly settle in, as he went 2-4 with a run and two RBI.

“I was a little nervous, shaking off some rust… After that first at-bat, I kind of got it out of my way and played some ball,” Donahue said.

The Saints added another run when Wong, the very next batter, knocked a single into center field. San Luis Obispo would respond in the seventh, capitalizing on a passed ball by Harris to make it a 6-5 game. However, a 4-6-3 double play featuring Morrissey, Donahue and Jacob Sanchez (Texas – Rio Grande Valley) killed any momentum the Blues stirred up, as Arroyo Seco would escape the inning with minimal damage, preserving their narrow lead.

Reliever Jonathan Carlos (Long Beach State) took the mound needing only three outs to finish the game. The Saints got their first out when Harris picked off Blues’ catcher Chase Gallegos (UNLV) at first, making a perfect throw to Sanchez.

After another Harris-Sanchez connection for out number two, Blues infielder Kody Darcy hit a ground ball right into the glove of Donahue, who made the easy toss to his first baseman, securing the Saints’ first victory of the season.

According to Donahue, the home team always believed they were within striking distance, even when they faced an early deficit. The Honolulu, Hawaii native says that even though the Saints still have room to get better, the way they played in Tuesday’s win makes him very optimistic for the rest of the 2022 campaign.

“Nobody went down at all, we know what we’re capable of as a team,” said Donahue. “We have a lot of improvements to go, all around, but it’s fun to see that we’re not even where we can be and what we were able to do today.”

The Saints and Blues will wrap up their two-game series on Wednesday at Jackie Robinson Memorial Field. First pitch is scheduled for 6:05 pm PST. You can catch the action by tuning into the Saints YouTube and social media channels.