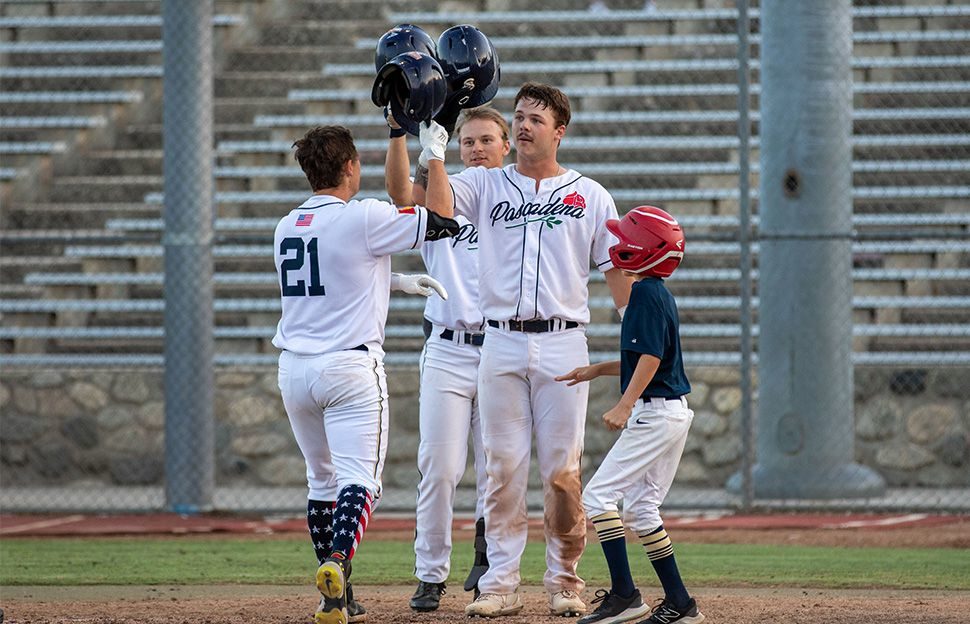 PASADENA, CA – The Arroyo Seco Saints welcomed the OC Riptide to Jackie Robinson Memorial Field for a Fourth of July matchup in Pasadena, Calif. The Saints saw some late inning fireworks in the 8th, but it just was not enough to complete a comeback.

The Riptide took the early lead 1-0 in the top of the first before Peyton Stumbo (Nevada-Reno) settled in and struck out two batters to end the inning.

The game was silent for two innings until the Riptide put another run on the board in the third inning.

Chris Stamos (Cal Berkeley) entered in the game in the fourth innings for the Saints and kept the Riptide shutdown. While the Riptide were able to stretch their lead with the help of unearned runs, Stamos struck out eight batters over three innings of work and helped to keep the Saints in the game.

The excitement came offensively for the Saints in the bottom of the eighth inning, when Cooper Harris (Wichita St.) lead off the inning with a double to deep left-center field to get the team going.

Drew Cowley (Oregon) then furthered his place as a Saints legend, sending a two-run shot to deep right-center field to get the Saints on the board.

Sadly, the Saints were not able to complete the comeback, as they fell to the Riptide 4-2.

Cooper Harris was a leader for the Saints in the Independence Day contest, picking up two hits in three at bats, as well as both stealing a base and throwing a runner out from behind the dish. Harris gave credit to a new approach today, stating that he focused on attacking first-pitch fastballs and trying not to get too deep into counts.

Harris also said that to get big innings, the team needs to have runners on base early in the inning. “This whole game is based off of momentum, that was a big momentum changer for us.”

Chris Stamos struck out eight during his time on the mound, and said that bouncing back from his game against the Barons with a performance like that feels good. He also said it’s important to keep focusing on finding the strike zone as a staff, “When we do, as a team, things go well”.

When asked about Monday’s game, Saints’ manager Aaron Milam described what happened as “too little, too late”. He said that the team needed to get moving earlier in the game, and both the players and the coaching staff have to make adjustments to make that happen.

Milam also described the big home run in the eighth inning as “Drew Cowley does Drew Cowley”, which seems to be a common notion in terms of the longtime Saint.

The Saints will play their next game against the MLB Academy Barons on Wednesday night at 6:00 pm PST at the Urban Youth Academy in Compton, Calif.