First Shutout of the Summer Comes 11-0 Against Riptide 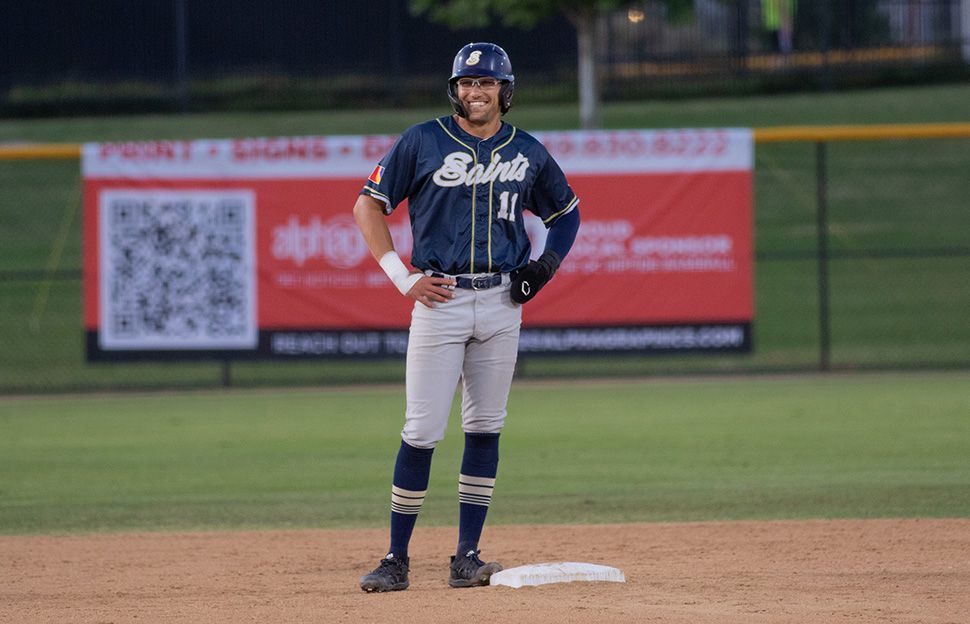 IRVINE, CA – The Saints headed down to Great Park in Irvine, Calif. to face off against the Orange County Riptide on Friday night to close out the two-game set. The Saints offense jumped out to an early lead and never let up, while the pitching staff was absolutely lights out.

The game was quiet to start, with neither team grabbing a run through the first two innings. Keegan Allen (WVU) started the game, throwing 4.0 innings and striking out three and only surrendering two hits.

Max Blessinger (Pasadena CC) led off the top of the third with a single. Jack Walker (LA Tech) then reached, and Drew Cowley (Oregon) brought Blessinger around to score to post the first run of the game. Kyson Donahue (Hawaii) then drove a single, scoring both Walker and Cowley to give the Saints a three-run lead.

Jack Walker then reached again with two outs in the fourth inning, allowing Cooper Harris (Wichita St.) to send his first homerun of the summer well over the left field fence, extending the lead to five runs.

Arroyo Seco’s biggest inning came in the fifth, when Cowley got the Saints started with a single. Donahue then walked to put two men on, and was followed up by a single from Matt Wong (Hawaii) to load the bases. With ducks on the pond, Peyton Holt (Arkansas) grabbed his first hit of the day and drove in two runs in the process. Max Blessinger then picked up his second hit of the day, scoring Wong. Jack Walker got on base for the third time to again load the bases for the Saints. Jordan Rogers (Wichita St.) took a pitch to the back with the bases loaded, bringing in the final run of the fifth.

Dom DiRado (Binghamton) then entered the game with the nine-run lead, striking out one and giving up one hit to keep the shutout going.

Mitchell Scott (Cal Berkeley) entered the game at the end of the sixth, and only allowed two men to reach base while picking up a strikeout of his own.

The Saints’ final insurance runs came in the seventh. Jack Walker led the inning off with a walk, and Jordan Rogers than drew one of his own. Drew Cowley then reached on a fielder’s choice, and Kyson Donahue sent another double in the gap to score Rogers and Cowley for his third and fourth RBIs of the game.

Donny Smith (Vanguard) made his debut for Arroyo Seco in the eighth inning, posting a 1-2-3 inning and striking out one of the more prolific hitters in the Riptide lineup.

Logan Deskin (Regis) closed out the game for the Saints, taking the ball in the ninth and going 1-2-3 as well.

A big story of the game against the Riptide was the Saints’ pitching staff during the 11-0 shutout. Not a single pitcher for Arroyo Seco gave up a run, with all of the pitchers in the Friday night matchup recording at least one inning and at least one strikeout.

After being behind the dish for the shutout pitching, Cooper Harris had high praise for the pitching staff. “Keegan Allen, he gave us a chance all game and that’s all you can ask for … then you had Dom Dirado, Mitch, Donny, and Logan Deskin to shut it out. That’s all you can ask for with a pitching staff is just keep putting up zeroes on the board.” Friday night’s game was without a doubt the most dominant performance we have seen from the pitching staff as a whole this summer.

Harris, who also hit his first homerun of the season during the contest against the Riptide, said “it was the best feeling ever … it was awesome”.

The Saints’ offense was definitely firing on all cylinders during the game, and Max Blessinger said that after facing the Riptide previously they were able to make some adjustments. “They’ve pitched us well, and as a team and individually we’ve started noticing tendencies of how they were pitching us, we were able to kind of jump on some pitches early in counts and that helped us have a successful day.”

Kyson Donahue had a big performance against Orange County, but credited the game as a holistic team win. “All around good baseball from the pitching mound, to defense, to the at bats we were taking. I think we really bounced back from last night.”

Saints’ manager Aaron Milam placed importance on winning games against close competitors within the division. Milam understands the importance of beating close divisional opponents when it comes to making the CCL Playoffs, and that is something he used to motivate the players.