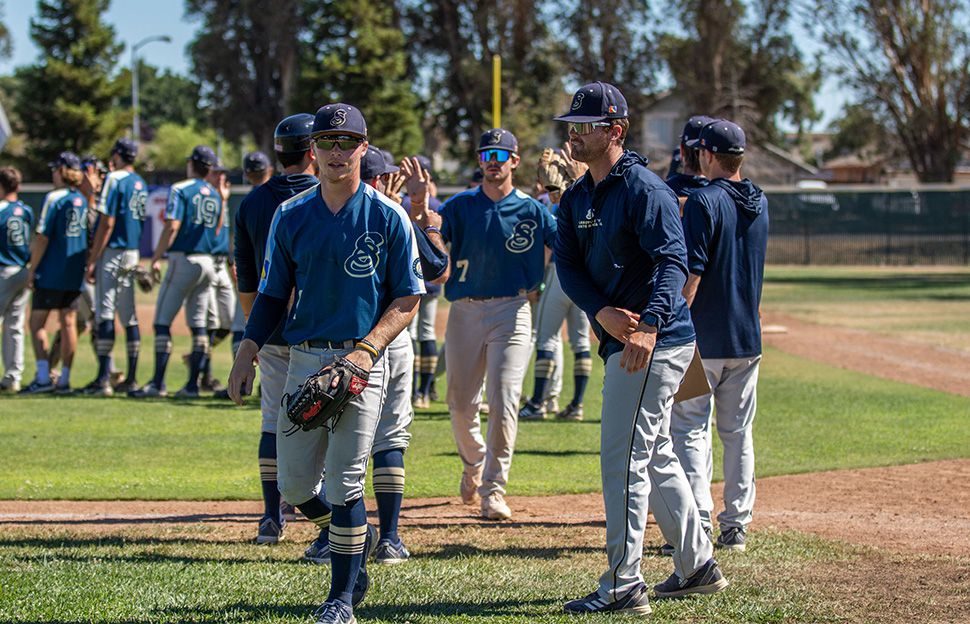 FAIRFIELD, CA – The Saints took on the Sonoma Mudcats today in the last contest of the trip up north in a Sunday day game at the Vanden baseball field in Fairfield, Calif. The Saints got off to a hot start scoring all seven runs in the first four innings.

The Saints got the bats moving early in the 1st inning after a two out walk by Kyson Donahue (Hawaii) led to Peyton Holt (Arkansas) sending an RBI single to right field to take the lead 1-0.

Carson McKinney (Kansas) kept the Saints in the lead through the bottom of the first striking out two Mudcat’s batters.

Jackson Walker (Louisiana Tech) tried to start another two-out rally in the second inning, shooting a base knock up the middle, but the Saints were unable to extend the lead.

Max Blessinger (Pasadena CC) made a diving play in right field and Jacob Sanchez (Texas Rio Grande Valley) gunned down a runner in the 2nd inning as the Saints kept the Mudcats off the board through two innings.

The Saints exploded for three runs in the 3rd inning as Drew Cowley (Oregon), Kyson Donahue, and Peyton Holt all doubled and scored, and Matt Marlow (Regis) drove in an RBI on a single to left field as the Saints extended the lead to 4-0.

The Mudcats battled back, getting two runs of their own in the bottom of the 3rd, but McKinney settled back in and picked up his third strikeout of the game to keep the score at 4-2.

Two runs did not affect the Saints as Drew Cowley struck an RBI triple in the 4th to drive in Connor Beichler (Oral Roberts) and Jackson Walker. Cowley then took home on a passed ball to increase the Saints lead to 7-2.

The game stayed quiet until the 6th inning when the Mudcats scratched across a run, but some solid pitching by Drew Zittel (Biola) in 7th and 8th innings backed up by another web gem by Max Blessinger in the 8th kept the Mudcats quiet.

Solano did not score again until the 9th when they scratched across one more before Jake Porter (BYU) shut the door to set a final score of 7-4.

The Saints owe a large part of the victory to another fantastic performance by Drew Cowley, but as Coach Aaron Milam has said of the longtime legend, performances like today are something fans have come to expect from Cowley.

Jack Walker had his best performance at the plate so far this summer, reaching base four times on three hits and an error. Walker also swiped two bases in the midday matchup against the Mudcats.

When asked about his performance, Zittel said that he was focused on moving quickly, and wanted “to keep the momentum in our favor”. Zittel also described the sliding catch as “huge” and said, “I thought it was going foul, I wasn’t even watching it … huge out I wasn’t expecting”.

Blessinger was able to get to the ball because he never thinks a ball is out of his range, stating that “you never know ‘til you get there” and that “if you don’t get a good first step you won’t get over there”.

The Saints will be back in SoCal to play the MLB Academy Barons in Compton, Calif. on Tuesday, June 28th at 6:00 pm PST.