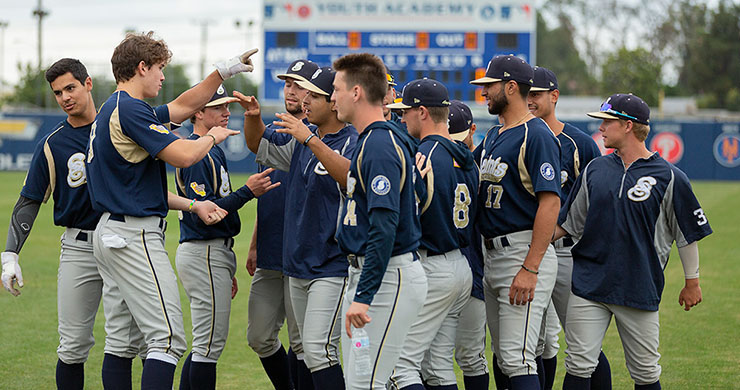 COMPTON, CA- The Arroyo Secco Saints came back from a five-run deficit to defeat the Academy Barons 8-6 on Tuesday night.

“We stayed in the game and gave us a chance to win. Race Gardner (Hawaii Hilo) won that game from the mound and without that, we don’t have a chance to win the game,” said head coach Milam.

In the top of the fifth, the Saints got there first run of the game as Evan Russell (Tennessee) leadoff with a walk. He stole second base, giving an opportunity for Matt Thomas (Harvard) to bring him in. Thomas hit a single to left driving in Russell from second.

Still down four runs the Saints looked to get a rally going in the top of the sixth. Christian Scott (Tennessee) started the inning with an infield hit. Anthony Forte (Richmond) walked right after him giving two on and no out for Drew Cowley (Cal Poly Pomona). Cowley hit a shot over the right field wall to cut the deficit to just one run.

“I was just trying to learn from every at-bat, and he left a pitch over the zone and I was able to put a good swing on it and able to get it out of here,” Cowley said.

Andy Garriola (Old Dominion) hit a solo shot over the left field wall in the top half of the seventh to tie the game at five apiece.

In the bottom of the eighth the Barons looked to regain the lead as they had the bases loaded and two outs. Relief pitch Chris Burnette (Cal Poly Pomona) got the batter to ground out to second for the final out of the inning.

With momentum on their side, the Saints were threatening in the top of the ninth. With two outs and bases loaded, Cowley worked a walk to score the go-ahead run. The very next batter, Thomas Luevano (USD), hit a single into left scoring two runs and giving the Saints an 8-5 lead.

“It was huge to get insurance runs and I was looking to be aggressive at whatever he threw at the zone and I knew he was tired, so he threw a fastball right down the middle and I took advantage,” Luevano said.

In the bottom of the ninth, Burnette got into some trouble with the bases loaded and only one out in the inning. Michael Hendricks (Lee) came in and walked the first batter he faced scoring a run for the Barons. Hendricks settled down and struck the final two batters of the inning to give the Saints the win.

As the Saints bullpen only allowed one run, Gardner had a dominant performance as he pitched four and two thirds scoreless innings.

The Saints will now head to Irvine as they will face the OC Riptide on Wednesday night. First pitch is set to be at 6:30 p.m.