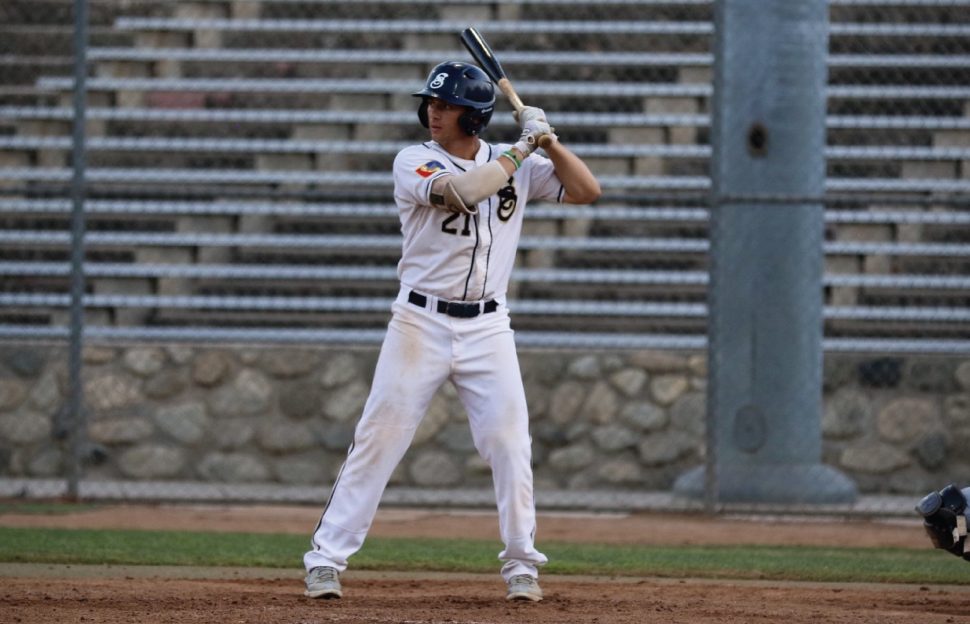 PASADENA, CA — Two strikes, two outs and two runners on base in the bottom of the ninth. The Saints are down 6-5 to the Santa Barbara Foresters with third baseman Drew Cowley (Cal Poly Pomona) at the plate. It’s a moment every young player imagines in their backyard.

Cowley made it a reality, smoking a fastball deep to right-center field to give the Saints an 8-6 victory.

“I’ve never done that before,” Cowley said after the game. “[Santa Barbara pitcher Gabriel Starks] blew a few fastballs by me in the beginning, and so I stepped out, kind of took a deep breath, slowed myself down a little bit and was able to put a good swing on it right there.”

Santa Barbara got started early, taking a 2-0 lead on a two-out, RBI single in the top of the first. Steier managed to get out of the jam to limit the damage, stranding three runners with the bases full.

The Foresters added to their lead in the second to go up 3-0. A fourth run was almost scored, but Steier fielded a weak hit in front of the mound and flipped it to catcher Bo Willis (Northwestern State) to put out Forester third baseman Dylan Campbell and prevent another run.

Willis got the offense started in the third with a leadoff single to left. He quickly reached third after stealing second and advancing on a throwing error. A groundout from second baseman Jackson Cobb (Crowder) was enough to get Willis home and the Saints on the board.

A scoreless inning from Steier in the fourth kept the Saints in reach, and the offense closed in on the lead. Three infield singles from Cowley, first baseman Jake McMurray (Oral Roberts) and right fielder Josh Cowden (Brigham Young) opened the inning, and left fielder Jag Burden (UC Berkeley) reached on a fielder’s choice, allowing Cowley to score and cut the deficit to one.

Steier fully settled in to his bend-don’t-break pitching in the fifth, allowing two more base runners but keeping the Foresters off the board. Even with the high pitch-count, Steier wanted to end his night on his terms.

"We were taking him out in the fourth and he wants to keep going," Milam said. "I typically don't want to do that, but his answer is 'I'm not coming out of the game yet.' It's hard to say no to a kid when they do that."

In the bottom of the fifth, Willis got on base for the second time with a leadoff walk in the fifth, and designated hitter Connor Bradshaw (Pepperdine) sent a missile to deep left field, legging out a triple to score Willis and tie the game 3-3.

Two batters later, Cowley sent a grounder that slipped through the Foresters’ shortstop’s glove and allowed Bradshaw to score and give the Saints a 4-3 lead.

Santa Barbara knotted things back up in the seventh, and quickly took a 5-4 lead. The Saints' tied it back up in the bottom of the frame, as a chopper to third from center fielder Cooper Elliot was misplayed, and Cobb strolled home.

Santa Barbara loaded the bases to open the eighth before Derek Yoo (Columbia) entered the game. Despite inheriting the jam, Yoo got out of the inning with Santa Barbara scoring just one on a passed ball.

McMurray made the highlight play in the frame, making an acrobatic leap to snag a hooking line drive down the first base line to secure the second out and prevent two runners from scoring.

Yoo pitched a scoreless ninth to keep the Saints within one, and the rest was history. Cobb singled with one out, Elliot turned an 0-2 count into a walk, and Cowley ended the game in the next at bat.

Milam praised Cowley’s approach in the final at-bat, noting he wanted him to swing earlier to get his timing right. After four pitches, Milam saw Cowley was on time, and knew what would happen next.

“We’re sitting there like, ‘If this guy throws a fastball, it’s gone,’” Milam said.

The Saints play the Foresters again tonight in Santa Barbara at 6 pm PST.