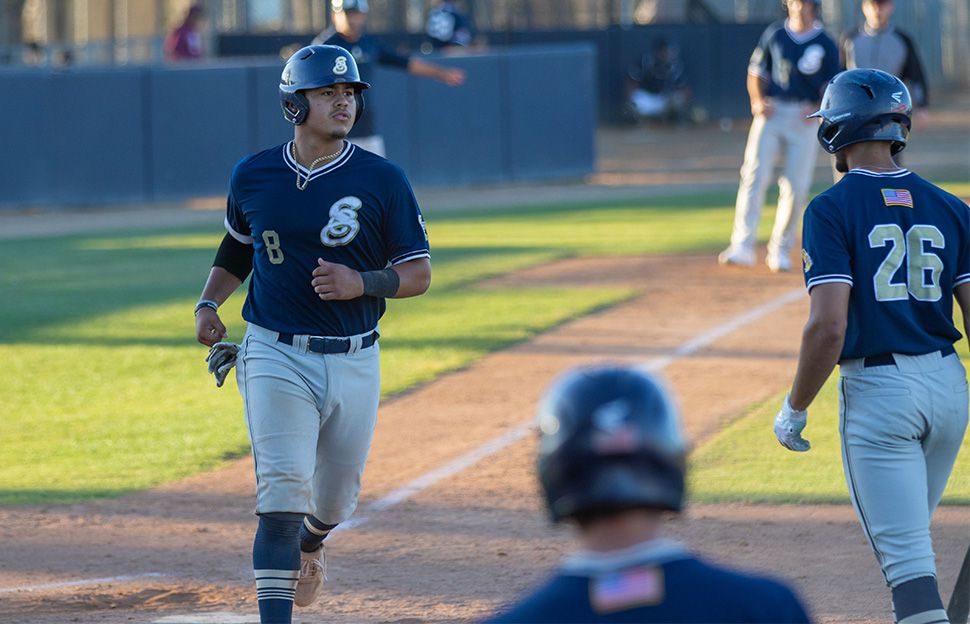 COMPTON, CA – The Saints headed to Compton Youth Academy to face off against the Barons in a midweek matchup under the lights. The Saints were led by an offensive explosion in the fourth inning and did not let up until the final out of the 13-5 victory.

The Saints put up the first run early in the first when Kyson Donahue (Hawaii) drew a two-out walk that was followed up by an RBI single off the bat of Peyton Holt (Arkansas).

The Barons responded in the bottom half of the inning by putting up four of their five runs for the day quickly.

History repeated itself in the top of the third when Kyson Donahue drew another two-out walk followed up by another RBI knock by Peyton Holt.

The game was blown wide open in the fourth inning, started by Matt Marlow (Regis) drawing a walk of his own. Jacob Sanchez (UTRGV) then drove him in with a double. Jack Walker (Louisiana Tech) proceeded to pick up a base knock, and Sanchez came around to score on a passed ball before Jeff Bauser (Nevada-Reno) picked up a base knock to put two on base. Drew Cowley (Oregon) walked up to plate and the sweet-swinging lefty drove in Walker to set the bases at a first and third scenario. The Saints executed a perfect double steal as Cowley took second and Bauser stole home on the Barons. Kyson Donahue then reached base for the third time in this game with a single, and Peyton Holt brought both around to score.

The scoring continued in the fifth, as Jack Walker took a walk with one out in the inning. Jeff Bauser then sent a double into centerfield, and back-to-back walks for Drew Cowley and Max Blessinger brought in the ninth run of the game for the Saints.

The Saints were not close to being done, as a two-out walk from Matt Marlow led to a towering two-run blast over the left field wall off the bat of Jacob Sanchez. Jack Walker then reached first on a hit-by-pitch and made his way around to third where he scored on a balk by the Barons.

The Barons ended their drought as they scratched across their last run of the game in the seventh inning.

The Saints decided to put one more on the board in the final inning of the game. Cam Constantine (Texas) entered the game to lead off the ninth and shot a double into right-center field. Max Blessinger (Pasadena CC) moved him over to third with a single, and Jordan Rogers (Wichita State) brought him around to score with a sacrifice fly.

Catcher Jacob Sanchez felt good after his big performance against the Barons and said that he is placing importance on trusting his process. He also had high praise for the pitching staff, saying that “they worked their tail off…they really showed out today”. He further on that notion stating that he was impressed by the bullpen’s performance throughout the night.

Saints’ manager Aaron Milam is hopeful about the team looking forward, and saying that going into the back half of the season it is important for the team to go on a run. The game against the Barons was an important performance momentum-wise and the team hopes to build on this and string together some wins.

Player of the Game: Jacob Sanchez