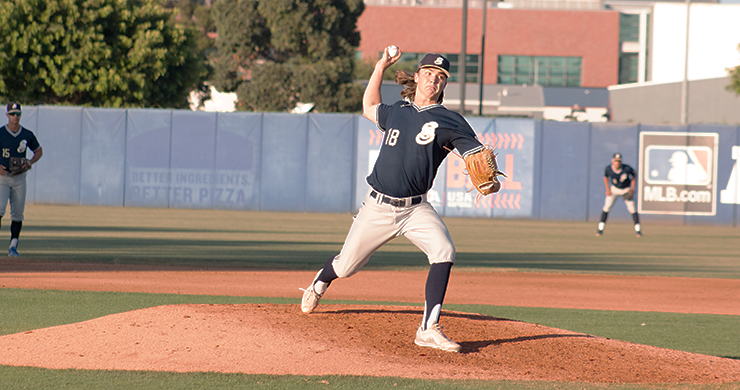 COMPTON, CA – Timely hitting and lockdown pitching were the keys to victory as the Arroyo Seco Saints defeated the MLB Academy Barons 9-2 on Thursday night.

The Saints took the lead in the first inning. Second baseman Thomas Luevano (San Diego) got the game rolling with an infield single and scored off another infield single by designated hitter Andy Garriola (Old Dominion).

In the second inning, catcher Jacob Wyeth (Cisco) hit a grounder to the shortstop but made his way to second on a throwing error. With two outs and Wyeth on second, center fielder Christian Scott (Tennessee) doubled to the gap in right field to increase the Saints lead to 2-0.

After three scoreless innings, the Saints tacked on another run in the sixth. First baseman Pete Derkay (Tennessee) doubled to left field, then third baseman Jayson Gonzalez (Vanderbilt) and left fielder Evan Russell (Tennessee) both had infield singles to load the bases. Scott was then walked, which allowed Derkay to score the third run for the Saints.

Luevano pounded a solo home run over the wall in left-center to start off the seventh inning. Shortstop Drew Cowley (Pomona) then singled to right field before scoring off Derkay’s double to right-center. Gonzalez then made his way to the plate and ripped a two-run home run over the fence in center field, giving the Saints a 7-0 advantage.

“As soon as he got to two strikes, I just tried to choke up and put the ball in play, he ended up leaving the ball up and I was able to put a good swing on it,” Gonzalez said.

In the bottom of the seventh, the Barons scored their first run of the night.

Right-handed pitcher Cade Bullinger started on the mound for the Saints with a remarkable seven-inning outing, allowing just one run and striking out eight.

“I just wanted to go out there and throw a lot of strikes,” Bullinger said. “I wanted to give something for our offense to work off of, so throwing a lot of zeros up gave them the opportunity to go up there and swing.”

The Saints added another run to the board in the eighth. Right fielder Anthony Forte (Richmond) opened the inning up with an infield single and later scored when Cowley hit a sacrifice fly to right field.

Right-handed pitcher Chris Burnette (Pomona) relieved Bullinger in the bottom of the eighth, allowing one run.

In the top of the ninth, Gonzalez hit an infield single before both Russell and Wyeth were walked to load the bases again. Gonzalez scored the ninth run for the Saints when Scott grounded out to third.

Left-handed pitcher Trevor Beer (Santa Barbara) relieved Burnette in the ninth to finish out the game, leaving the Saints with a 9-2 victory.

“Cade Bullinger is hard to beat, not only is he firm but he is also deceptive in the delivery,” head coach Aaron Milam said. “I thought it was a really well-played baseball game, I really enjoyed watching them tonight.”

The Saints and Barons will face off again on Friday at Jackie Robinson Memorial Field in Pasadena, Calif. The first pitch will be thrown at 6:05 p.m.