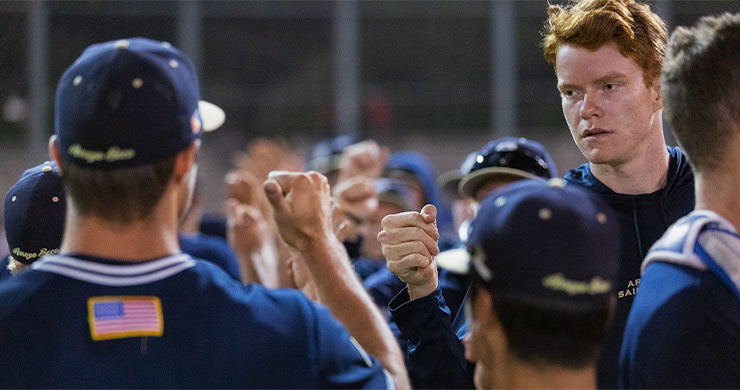 The Saints broke the game open in the bottom of the sixth. With the bases loaded and no outs. first baseman Nikolas Pagan (Hartford) hit a bases-clearing double to give the Saints a 5-1 lead.

“I had a feeling he was going to try and sneak something away because he went 0-2 shake and usually that leads to a fastball so I was sitting left side and got a pitch I could drive,” Pagan said.

Drew Atherton (Cal Poly Pomona) started the game for the Saints as he pitched three scoreless innings, only allowing two hits while striking out two batters and walking three.

In the second inning, Atherton pitched out of a jam as there were runners on second and third with no outs. After a walk and a single to the first two batters of the inning, an error in center field allowed the runners to advance. The following two batters flew out to left field, but the hits weren’t deep enough to test the arm of Andy Garriola (Old Dominion). Atherton struck out the next batter to get out of the inning.

The Saints scored the first run of the game in the bottom of the fifth. Catcher Jacob Wyeth (Cisco JC) started the inning by hitting a double over the right fielder’s head. With two outs, Drew Cowley (Cal Poly Pomona) hit a slow roller to short where the shortstop was unable to make an accurate throw to first as it got by the first baseman, scoring Wyeth from second.

In the top half of the sixth, the Blues got the run back as they hit a solo home run to left to tie the game at one.

Looking to get some runs, the Saints got three straight singles to load the bases in the bottom of the sixth. Wyeth broke the tie as he was able to beat out the throw at first scoring a run.

The Blues comeback fell short as they managed to score two runs in the final two innings of the game.

The Saints bullpen pitched a gem as they only allowed two earned runs in six innings pitched. Eli Riechmann (Blinn) struck out seven batters in his four innings of relief and only allowed one run on two hits.

“Riechmann came in and showed that he is probably one of the best arms in the staff right now and so I’m really liking what he has. I think our pitching carried us today until our offense was able to turn it on,” said Saints head coach Aaron Milam.

Pagan finished the game 2-for-3 with a single and double while driving in three runs. Wyeth went 2-for-4 with two runs scored and one batted in.

The Saints now have an overall record of 3-3 in the California Collegiate League and will now face Santa Barbara Foresters on Thursday night at Jackie Robinson Memorial Field. First pitch is set for 6:05 p.m.