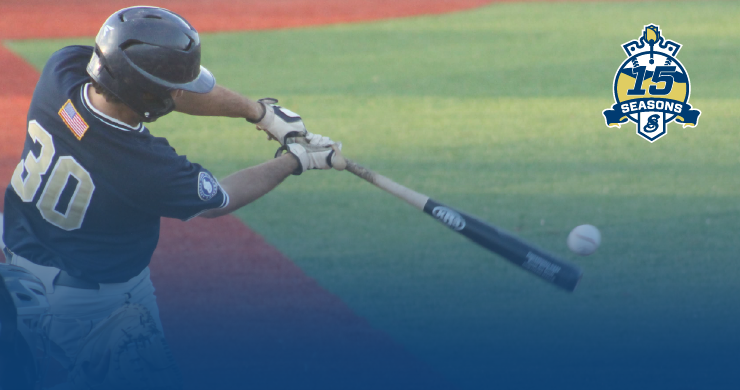 SIMI VALLEY — The Saints (2-4, 2-2 CCL) took on the independent Ventura County Buccaneers in a non-league matchup on Thursday afternoon. The Saints lost by a score of 8-6, and were in the game throughout, but the story of this matchup is the same as in the other three Saints losses, pitching letdowns and men left on base. They allowed at least 7 runs for the 5th time this season and stranded a total of 12 runners.

Arroyo Seco took the early lead. After stranding three runners in the first, failing to cash in on a bases- loaded with nobody out opening, the Saints responded with a two-out rally in the second. With two already down and nobody on, second baseman Cameron Briggs from UC-Davis was plunked with a fastball. Next stepped in right fielder Christian Moya of USC, who drilled a ball to the base of the wall in right-centerfield. He reached third, sliding in with a triple, and scoring Briggs from first.

The Bucs answered back in a similar fashion. With two out and a man on second, a base hit scored the tying run, thus beginning the see-saw affair in earnest. The Saints left another pair of runners on in the fourth inning, and in the bottom half Ventura took the lead at 2-1. In the 5th, USC third baseman Marco Martinez doubled to tie the game at 2, and the Buccaneers re-took the lead in the bottom half of the inning.

Bobby Fulkerson, pitcher from Southern New Hampshire University, entered the game in the 6th with the Saints trailing 3-2. Fulkerson struggled and allowed four runs, including a three-run home run to Buccaneers’ first baseman Daulton Duarte. Duarte came to bat after an intentional walk that came back to bite the Saints. After six innings, and the score at 7-2, Arroyo Seco was faced with their third consecutive game where they trailed by at least five runs.

“We’re not getting ahead of hitters early,” said Coach Sean Buller, “and runners in scoring position with less than two out, we’re not taking advantage of [those situations].”

The Saints’ offense hit its stride in the seventh. Cal Poly’s Brennan McKenzie got the Saints back into the game with a double that drove in a pair. Mitch Kerner, Wednesday’s player of the game, followed with an RBI single, and the Saints entered the bottom of the seventh inning only down two runs.

Ventura County pushed their lead to 8-5 entering the 9th inning. But as has been the pattern for the Saints thus far this season, after falling down the Saints battled back to keep the game close.

Arroyo Seco loaded the bases with nobody out, and unlike in the first, they were able to cash in with at least one. With Lee’s Dalton Ney on first, McKenzie on second, and Williams on third, the Saints had a chance with the go-ahead runs on base. The Buccaneers brought in their closer Robert Herner who shut the rally down, leaving the Saints’ efforts for naught.

“I think we’ve got some really good hitters and some really good pitchers too,” said Williams. “We’ve just got to figure it out and get into a groove. Just stay loose, play loose, don’t stress about anything. Don’t play the jersey, just play the game.”

The Saints continue their road-trip by taking on the OC Riptide in Fullerton on Friday at 4:30 PM, then finish with the MLB Academy Barons in a Saturday evening affair at 6:30 pm in Compton. The Saints return home on Tuesday after a pair of days off. They will take on the Buccaneers again next Thursday in Pasadena.