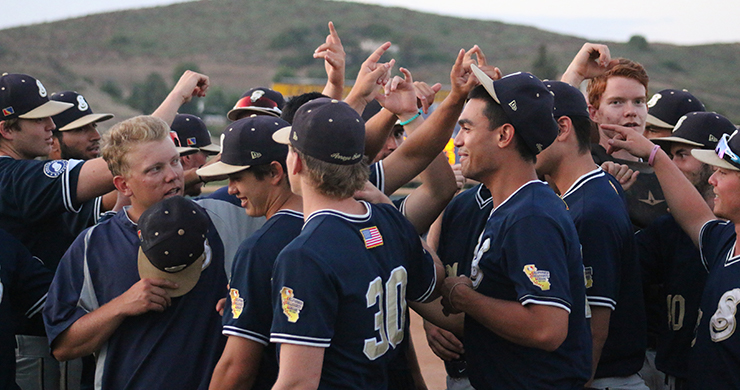 The Saints’ bats were on fire throughout the entire game. In the first inning, shortstop Drew Cowley (Pomona) was walked before designated hitter Thomas Luevano (San Diego) hit a hard grounder to the Riptide’s third baseman but was safe at first on an error. Then, first baseman Pete Derkay (Tennessee) blasted a two-run double into the gap in right field. Immediately after, third baseman Jayson Gonzalez brought Derkay home with a line drive single to center field.

The Riptide managed to put up two runs in the bottom of the first but the Saints widened their lead in the top of the second. Catcher Thomas McCarthy (San Francisco) smacked a line drive to center field. Right fielder Christian Scott (Tennessee) then knocked a grounder up the middle. Second baseman Morgan Allen (St. Edward’s) then singled to the gap in center, allowing both McCarthy and Scott to score.

The Riptide made their way to the board again in the bottom of the second, making the score 5-3.

Right-handed pitcher Cade Bullinger (Texas) started on the mound for the Saints, pitching two innings. He was relieved by left-handed pitcher Eli Riechmann (Texas Tech) in the third.

The Saints silenced the Riptide in the top of the fifth. Left fielder Evan Russell (Tennessee) hit a grounder to the Riptide’s third baseman but was safe on a fielder’s choice. McCarthy then singled to left-center as Russell advanced to third on the throw. Scott was walked to load the bases. With two outs, right fielder Anthony Forte knocked a bases clearing double into center field. Allen hit an infield single and later allowed Forte to score after being picked off at second, to give the Saints a six-run lead.

The Riptide added two runs in the bottom of the sixth, but the Saints came back strong, scoring three more runs in the top of the seventh. Both McCarthy and Scott were walked before Forte pounded his second double of the evening into center field to score them both.

“I was just trying to see a pitch up and get something I could drive to the outfield,” Forte said. “I wanted to give our guys chance to score, the guys on base are pretty fast.”

Riechmann was relieved by left-handed pitcher Isaiah Ramos (Antelope Valley) in the bottom of the seventh.

The Riptide added two runs in the eighth but due to no lights at the field, the game was declared over in the bottom of the eighth.

“Baseball games are lost, they are not won,” head coach Aaron Milam said. “We weren’t as sharp as we usually are on the mound, but the fortunate part is you only have to be better than the team you are playing…”

The Saints will face the Santa Barbara Foresters for the 2019 CCL Championship at Cal Lutheran University on Friday. The first pitch will be thrown at 4:30 p.m.

The winner of that matchup will head to the California State Championship Series.