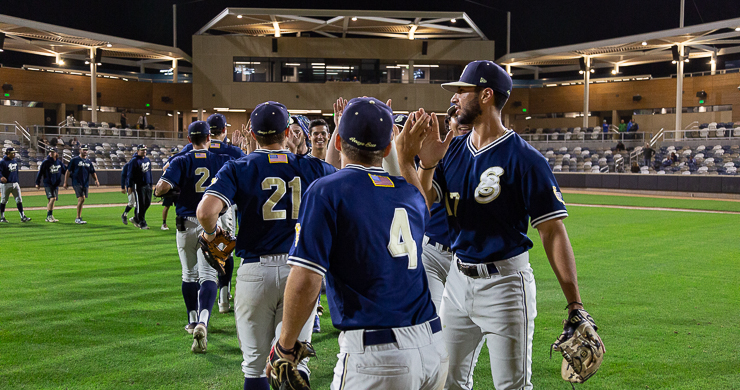 IRVINE, CA – With a solo home run by designated hitter Thomas Luevano (San Diego) and a two-run home run by right fielder Andy Garriola (Old Dominion) in the sixth inning, followed by an impressive seventh inning by the Saints’ offense, the Saints defeated the Orange County Riptide 10-5 in Irvine, Calif. on Wednesday afternoon.

Righty Cade Bullinger (Texas) kept the Riptide from scoring for the first three innings. The Saints broke the game open in the fourth inning when Luevano singled to the gap between short and third. After stealing second and then third on a wild pitch, he was able to score on left fielder Evan Russell’s (Tennessee) sacrifice fly to left field.

The Riptide took the lead in the bottom of the fourth, scoring three runs to make the score 3-1.

In the top of the sixth, Luevano sent a rocket over the left field wall for a solo home run.

“I was trying to hit the ball hard,” Luevano said. “I got it right there and he kind of missed a little bit over the middle and I just hit it hard and did what I wanted to do.”

Russell then singled to left field. With a runner on first and no outs, Garriola blasted a deep fly ball out of left field for a two-run home run. This marked Garriola’s second home run in the past two games.

“I had two straight balls, so I knew something in the zone was coming and then I just put a good swing on it,” Garriola said.

The Riptide regained the lead in the bottom of the sixth but the Saints rallied in the seventh, scoring a total of six runs.

The eventful inning kicked off when center fielder Anthony Forte (Richmond) sent a hard line drive to center for a base hit, before stealing second. Shortstop Drew Cowley (Pomona) was then walked. Luevano loaded the bases with a single to center field. Russell tied the game up with a single to the gap in center field to bring home Forte. The Saints took back the lead after Cowley scored on a wild pitch. With a runner on second and third and one out, pinch hitter Tido Robles (Azusa Pacific) brought in Luevano with a sacrifice fly. Catcher Jacob Wyeth (Cisco) and first baseman Pete Derkay (Tennessee) were both walked to load the bases. Second baseman David Reyna sent a hard grounder to the Riptide shortstop and was safe on a throwing error, which allowed both Russell and Wyeth to score. Derkay brought in the final run of the evening after scoring on a passed ball to make the score 10-5.

“Our three game goals are to; win the freebie war, to have one big inning, and to win the 15-pitch per inning war, which we did. Win those, win the game,” head coach Aaron Milam said.

Bullinger was relieved in the bottom of the seventh by lefty Jaime Robertson (Emory). Robertson pitched the remainder of the game and was able to keep the Riptide from scoring. Bullinger ended his six-inning outing with five strikeouts.

“I’m a huge fan of the competitive energy that both teams bring,” Luevano said. “[The Riptide] are a good team, whenever we play them it’s competitive and it’s a lot more fun that way.”

The Saints will take on the MLB Academy Barons on Thursday at Jackie Robinson Memorial Field in Pasadena, Calif. The first pitch will be thrown at 6:05 p.m.