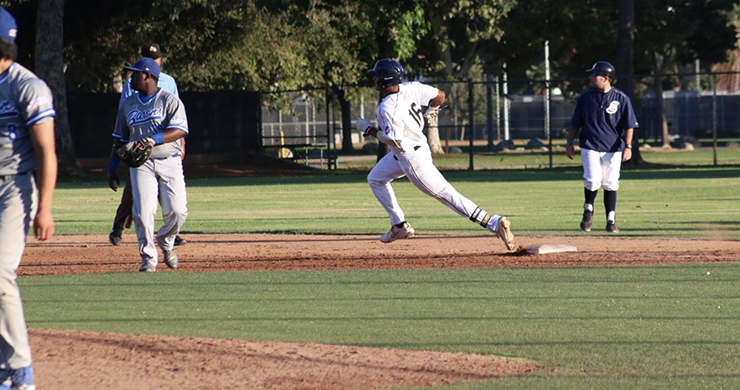 PASADENA, CA – The Arroyo Seco Saints offense exploded for 16 runs on Friday night as they defeated the MLB Academy Barons 16-5. The victory earned the Saints a berth in the 2019 CCL playoffs.

Michael Garza (Incarnate Word) started the game for the Saints and pitched a gem as he only allowed one run over five innings pitched while striking out four.

“That guy is pretty electric, and he slings it. He is tough to hit because his delivery is a little unorthodox and he’s going to be one of the horses going next week,” head coach Aaron Milam said.

After the Barons scored one run in the first, the Saints answered right back with five of their own.

In the bottom of the third, the Saints added two runs thanks in part to a solo blast from Jayson Gonzalez (Vanderbilt).

“I was sitting off-speed and I knew he had good pitches so as soon as I saw the spin I was able to put a good swing on it and it went over the fence,” Gonzalez said.

After three innings the Saints were up 7-1.

Russell and Scott each added to their RBI total in the fifth as the Saints scored four runs. With runners on second and third Scott hit another single to score two. After five innings the Saints had a commanding 14-1 lead.

Gonzalez finished the game going 4-for-4 with a home run and three singles while driving in two runs. Russell and Scott each led the team with three runs batted in.

“Offensively we are pretty hot right now and we need to stay hot. The name of the game now is rest as we will rest some guys so we can play our best game on Thursday,” Milam said.

The Saints hit the road on Saturday to face the Santa Barbara Foresters. The first pitch is set for 6 p.m.